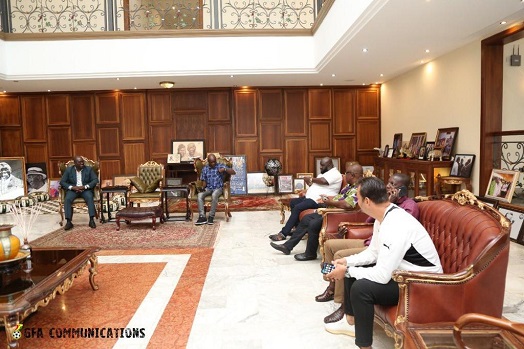 Former President of Ghana, His Excellency John Agyekum Kufuor says he has absolute confidence in the Black Stars and believes the players will perform to bring honour to the nation.

The Black Stars will be taking part in a record 4th FIFA World Cup finals in Qatar in November/December after staging a magnificent display to outwit Nigeria in March for one of the five slots on the African continent.

The former Asante Kotoko Chairman who supervised Ghana’s first qualification to the World Cup in 2006 in Germany expects players of the Black Stars to eschew selfishness and show team chemistry on the pitch during the Mundial in Qatar.

Former President Kufuor was speaking during a visit by Executives of the Ghana Football Association at his residence in Accra, where he gave his blessings to the team ahead of the Qatar tournament.

‘’I don’t remember being given a strip like this even in 2006, even though I followed the team when we played our first game against Italy,’’ he said.

‘’We performed so well and our only trouble was suffering from stage fright and we could have won against Italy that eventually became champions of the world. We did well by beating the Americans and the Czech Republic’’.

‘’I support the Black Stars and I give the team all the blessings. I can pray for the team to win and perform to the honour of our nation’’.

‘’I believe the boys can do it, they have exposure internationally and so stage fright should not be part of this tournament. What is left is for our side to play as a team’’.

A lot of times we tend to be selfish with our play so how we get the team to think together on the pitch, how we pass towards goal and to have the strength.

‘’We must be physically strong because our boys tend to fall too easily as far as I can see’’.

‘’The cache with our team in 2006 was the strength. You look at the captain, Stephen Appiah, characters like Sulley Muntari, Asamoah Gyan and you can’t just push them down easily, they were physically fit’’.

‘’One thing I pray you would ensure they go to the pitch with, is this is a man’s game and opponents shouldn’t easily push us down but that doesn’t mean we should commit fouls all over the place but we shouldn’t be walkovers’’.

‘’We must be strong, smart and have stamina and towards goal, we must work as a team and I’m sure we will come out with flying colours. You have all my blessings, prayers and support and I hope we make it past the group stage and continue to quarter finals, semi-finals and hopefully the finals’’.

Under his leadership, the Black Stars qualified for their first World Cup in Germany where Ghana suffered a second-round exit following a 3-0 loss to Brazil.