Fred rescues a point for Manchester United against Leicester 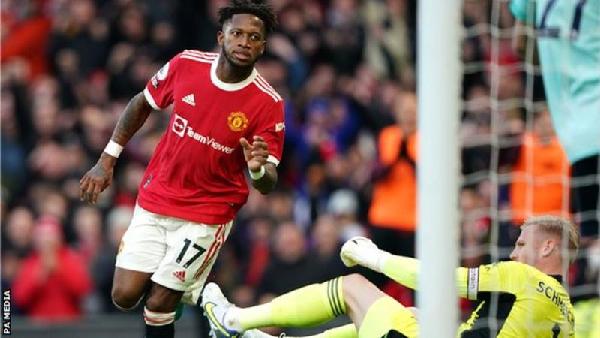 Manchester United’s top four hopes suffered a blow despite coming from behind to earn a 1-1 draw with Leicester City at Old Trafford.

The Red Devils lacked creativity and urgency as they struggled to offer a real goal threat in the absence of Cristiano Ronaldo through illness.

It was Leicester who carved out the better openings in a tepid first half but the visitors failed to register a shot on target to trouble David De Gea, while United’s one big chance saw Kasper Schmeichel deny Bruno Fernandes with an outstretched boot.

The game opened up following the break and the Foxes stole in front on 63 minutes when Kelechi Iheanacho headed home James Maddison’s superb cross.

The United faithful feared the worst but their side levelled just four minutes later when Fred lashed home a rebound after Schmeichel had parried a Fernandes shot into his path.

Leicester had big chances to restore their lead but Iheanacho fired over before De Gea produced a superb stop to keep out Wesley Fofana’s thumping header.

The visitors then had what looked like being a winning goal from Maddison ruled out by VAR following a foul in the build-up.

Man United will now turn their focus on a trip to Everton on Saturday while the Foxes host PSV Eindhoven in the Europa League Conference quarter final on Thursday.