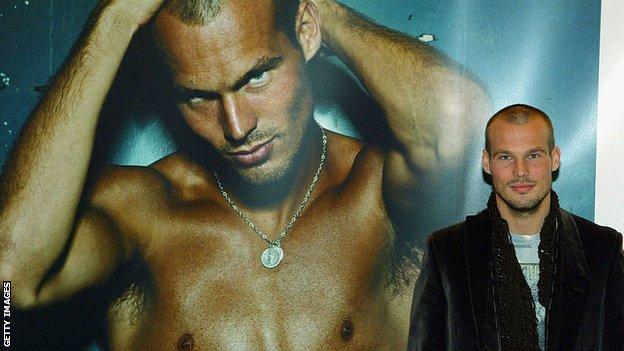 The shy Swede with vibrant pink hair. The surprisingly private underwear model. Arsenal's new caretaker manager Freddie Ljungberg is a paradox, a far more reserved man than the bolder image many have of him may suggest.

Over 12 years since departing as a player, former winger Ljungberg, 42, has been called on to save the Gunners' season following the sacking of Unai Emery.

He's an Arsenal and Sweden legend, but what else do we know about the Gunners' new interim boss?

The shy one?
Trading Arsenal for West Ham after nine years in 2007, Ljungberg - a key figure in Arsenal's record-breaking 'Invincibles' side that went a whole Premier League season without defeat in 2003-04 - departed as a two-time Premier League and three-time FA Cup winner.

He was named Arsenal's 11th greatest player of all time in 2017, yet despite his loud hairstyles on the pitch - as well as his infamous underwear modelling off it - Ljungberg is in reality a private individual.

"Considering the fact that he is one of our greatest of all time, we don't know a lot about Fredrik Ljungberg," Swedish football journalist Frida Fagerlund told BBC Sport.

"He has always been very low key when it comes to the media and other public appearances. He has spoken openly about not really trusting people in general, especially not during his last few years in the Premier League. That is probably why he hasn't done so many interviews." 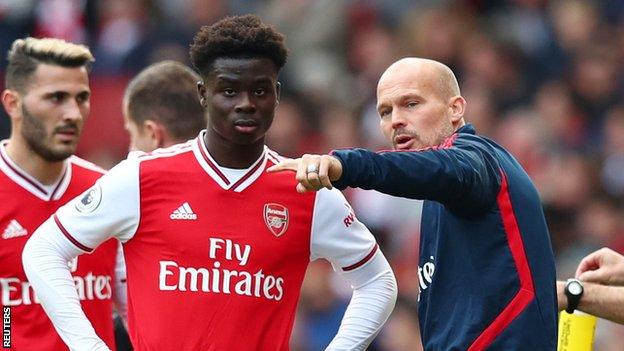 Even at home in Sweden - a country which has recently been spearheaded on the international football stage by the outspoken Zlatan Ibrahimovic - Vittsjo-born Ljungberg has maintained his mystery.

While his introverted nature has kept him from the headlines, his status as a Swedish football icon has not wavered.

Fagerlund added: "Fredrik will always be considered as one of the greatest. He did a lot for the national Team and today Arsenal is one of the most popular clubs in Sweden.

"He describes himself as shy but he is a strong character nowadays. That he's not driven by fame or recognition may be an advantage in his leadership. The model work he did for Calvin Klein was a bit of a surprise to everyone but he has said that it forced him out of his comfort zone, and it probably did.

"With that being said, he will always be a bit of a mystery. It is quite peculiar."

'When he spoke everyone listened'
Spells in Japan and India concluded Ljungberg's 20-year playing career. The Swede returned to Arsenal as Under-15s coach in 2016 before being handed the opportunity to join then-academy manager Andries Jonker at Vfl Wolfsburg as assistant in February 2017.

Tasked with keeping the struggling side in the German top flight, Jonker and Ljungberg achieved their objective courtesy of a relegation play-off, but were sacked six months later following a poor start to the 2017-18 season.

A close follower of his time in the Bundesliga, Wolfsburg football journalist Leonard Hartmann told BBC Sport that Ljungberg commanded attention despite his quiet approach - and the club's plight.

"Andries and Freddie arrived with a mission to stabilise the struggling team in the worst part of Wolfsburg's history and prevent the disaster of relegation," said Hartmann.

"The club had many problems. There were insecurities everywhere. Freddie's task was to talk to the players and give them back their confidence. He always acted in the background, but when he spoke everyone listened.

"The players listened carefully when he talked, because they had looked up to him when they were younger."

Given the opportunity to continue into the new season, Jonker and Ljungberg made "huge mistakes" prior to being sacked according to Hartmann, failing to alter their methods as team fitness was neglected in favour of tactics.

"Freddie said that he wished to have more time to give their ideas a real chance to grow, but it was the wrong time and wrong place. The club had much bigger problems than a former assistant and an inexperienced but ambitious young coach could solve," added Hartmann.

The Gunners welcomed their club legend back as Under-23s boss in 2018, and he impressed sufficiently to becomes Emery's first-team coach for the current campaign.

Can Ljungberg stake his claim?
Plenty of big-name managers have already been linked with the vacant managerial position at Emirates Stadium, but could Ljungberg conceivably remain as permanent manager?

Compared with other frontrunners for the position, Ljungberg's CV does not measure up to the Premier League experience of former Tottenham boss Mauricio Pochettino or Wolves' Nuno Espirito Santo - nor the European credentials of Massimiliano Allegri and Carlo Ancelotti.

Domestic rivals Manchester United and Chelsea have adopted a 'club legend' approach, with the former's Ole Gunnar Solskjaer earning a permanent contract following a sharp upturn in form after he took interim control.

That, of course, will be Ljungberg's sole aim when his out-of-sorts side travel to Norwich on Sunday.

"Throughout his career he has always done things his own way," Aftonbladet journalist Fagerlund said.

"I think that's why he never returned to Sweden. In London it's much easier to be yourself and it doesn't matter what you're into or where you come from. Pre-Zlatan it was still very unusual to have outspoken and slightly unique characters within football.

"The truth is we don't really know much about Fredrik's style as a manager. What we do know is that he's done a brilliant job with the youngsters and is likely to continue on that path. He will also probably bring back some players who have been out in the cold."

A number of Arsenal youngsters have praised Ljungberg's influence behind the scenes, with 18-year-old forward Bukayo Saka admitting he often relied on Ljungberg to explain former boss Emery's instructions.

With almost a decade of guidance from Arsene Wenger an inevitable influence, Ljungberg knows as well as any the type of football Arsenal fans are accustomed to. But, while the pink hair has since disappeared, he will likely know no other way than to add his own personal stamp.

"He wants his team to play offensive football and this is what Arsenal stands for," added Hartmann.

"I think he will do his job like he always has. Quiet, thoughtful and with a focus on technique and tactics.

"When someone with such a fantastic career like Freddie gives everything in a small town like Wolfsburg, where everybody liked his unpretentious way, why should he not succeed at the club he loves?"