Germany coach, Joachim Löw confirms Muller,Hummels and Boateng out of his plans 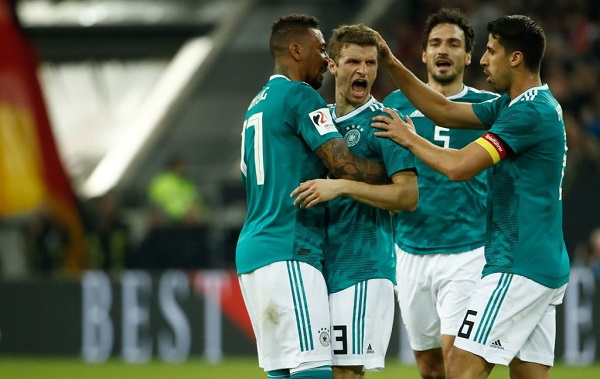 Germany coach, Joachim Löw confirms Muller,Hummels and Boateng out of his plans
Shares

Germany manager Joachim Low has confirmed that Bayern Munich trio of Mats Hummels, Jerome Boateng, and Thomas Muller will no longer have a place in his team.

The trio were instrumental for Germany back in 2014 as they helped their country secure the first World Cup in 24 years in the Brazil 2014 edition. Muller, in particular, chipped in with five goals as he bagged the golden boot award as he took his tally to 10 in all World Cup he has played in.

Low confirmed that the trio will no longer be considered for selection in the future, "They are all still world-class players who are at the forefront of their club and guarantee success.

They are big players who stand for a big time in the national team. They have spent countless years for Germany and the national team. I thank Mats, Jerome and Thomas for the many successful, extraordinary and unique years together. "

"In the national team, however, it is now important to set the course for the future. We want to give the team a new face. I am convinced that this is the right step. In the year of qualifying for the European Championship 2020, we are sending a clear signal of renewal. The young national team players will have the space they need to fully develop. You have to take responsibility now."