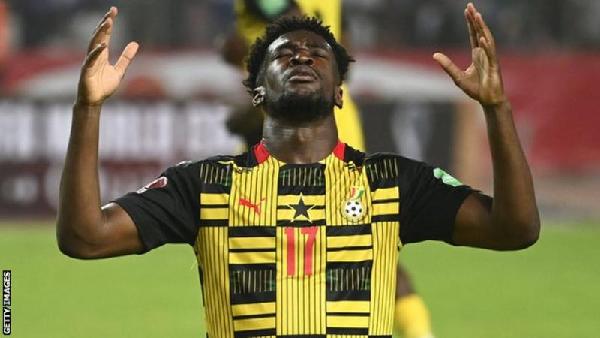 What do you do when your national team is struggling for form ahead of the World Cup?

Aside from calling up a host of new players, switching formation or changing coaches, you can always look for divine intervention.

The last option is what the government of Ghana and the country's football association (GFA) have decided to do just one month before the tournament in Qatar gets under way.

Two national days of prayer and fasting have been announced in the country, with the Muslim population participating on Friday before Christians follow suit on Sunday.

Whether it can help the Black Stars squad remains to be seen, with Ghana heading to the finals as the lowest-ranked of the 32 teams at 61st in the world.

The four-time African champions will face Portugal and South Korea in Group H before a grudge match against Uruguay, who knocked Ghana out in the quarter-finals in 2010.

But, after missing out on a spot at Russia 2018, expectations of an emphatic return to the global stage have been overshadowed by pessimism about coach Otto Addo and his players.

The former international took charge after a humiliating group-stage exit from the Africa Cup of Nations in January led to the departure of former boss Milovan Rajevac.

Addo helped inspire the side to edge past fierce West African rivals Nigeria on away goals in March to qualify for their fourth World Cup, but since then the Black Stars have endured a faltering run.

The government and GFA are now leaning towards a popular African praying phrase which says: "What God cannot do does not exist."

In June Ghana opened up their qualification campaign for the 2023 Nations Cup with a 3-0 home win over Madagascar before a 1-1 draw away to Central African Republic.

An injury-depleted and Covid-hit squad then put in a poor showing at the invitational Kirin Cup tournament in Japan, losing 4-1 to the hosts, before a 0-0 draw with Chile.

A September to forget followed.

After suffering a 3-0 friendly defeat by Brazil in France, Ghana made heavy work of beating Nicaragua, who are 81 places below them in the Fifa rankings, 1-0 in Spain.

The team's struggles and lethargic performances have led to doubts over the ability of Ghana on the pitch, and - having already changed coach and turned to the diaspora for new players this year - the country has now turned to God.

Seventy-one percent of Ghana's 32 million people are Christian, with 17% Muslim and a small segment adhering to traditional indigenous religions.

Those statistics understate the fervency of everyday faith - with many attending church on weeknights, all-night prayer vigils common and billboards advertising Christian meetings lining the streets.

"Ghana is a Christian country and our government have set a day aside to pray and do fasting for the national team," Owusu Boakye Amando, a fan of Aston Villa and Ghana, told BBC Sport Africa.

"The Muslims are starting and Christians will also pray for the national team. This is important so that we can wish them well when they go to Qatar."

Some Ghanaians have questioned Addo's lack of game management and commitment to the West African nation on social media.

The 47-year-old is combining his Ghana duties with a coaching role at German Bundesliga club Borussia Dortmund, where he spent six years as a player.

There is only a small window left to resolve on the pitch as Ghana have one more friendly before the tournament, against Switzerland in Abu Dhabi, on 17 November.

A week later comes their opening group match, against Portugal, when the Blacks Stars may need more than prayers to get a result.