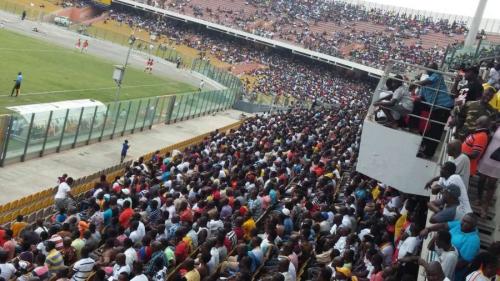 Presidential advisor on health, Dr Anthony Nsiah Asare has hinted that should the Ghana Premier League return anytime soon it will be without fans.

He said this in an interview with Kumasi based Wotunmi TV. According to him, government is in talks with the Ministry Of Youth and Sports and the Ghana Football Association over the resumption of football.

Football activities have been halted since March 2020 following government’s directive to ban all forms of sports as a result of measures taken to curb the spread of Covid-19.

President Akufo-Addo on Sunday gave the green light for Three national teams - Black Starlets (Male U-17), Black Princesses (Female U-20) and Black Maidens (Female U-17)  to begin camping ahead of their respective international assignments in September 2020.

"Our female Under-20 and Under-17 national football teams have been given the clearance to go into their respective training camps to begin preparations towards their FIFA and CAF-sanctioned international matches, which begin in September,

"Whilst in training, the playing, technical and management teams must observe strictly all the protocols issued by Government, CAF and FIFA against COVID-19. All other team and contact sports, and competitive sporting events remain suspended till further notice," the president said in his statement.

However, Dr. Asare said that should the various football leagues resume, it with be with spectators trooping to the various match venues to watch their beloved teams due to the coronavirus.

"The govt is planning for improved testing with the resumption of football in mind. We have factored football in the budget and we are working to restart football. Unfortunately fans coming to the stadium is not being considered in our discussions with the FA." he told Wontumi TV.

Meanwhile, GFA have announced that the 2020/21 Ghana Premier League will commenced in the second week of October pending government approval.

According to sources, the new season will begin with a different format as the 18 teams will be divided into two Zones, i.e., Northern Zone and Southern Zone.