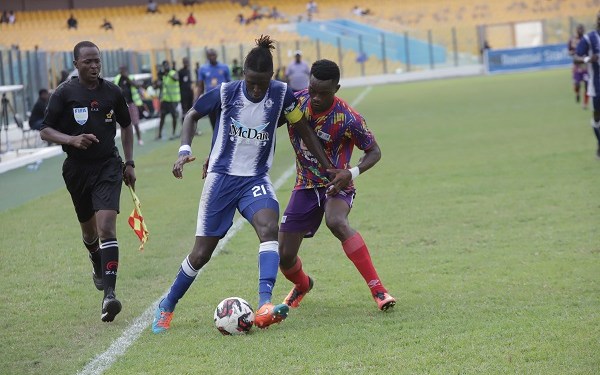 Depending FA Cup champions, Hearts of Oak will be in search of their first win of the season when they face Great Olympics in the Accra derby today, Sunday, September 18 at the Accra Sports Stadium.

Samuel Abbey-Quaye was the hero of the game as the ‘Dade boys’ started off their campaign with a win under Coach Yaw Preko.

Hearts of Oak on other hand suffered a 1-0 defeat away to Aduana Stars at the Nana Agyeman Badu Park.

A disastrous defending from The Phobians saw them lose to Coach Paa Kwesi Fabian’s side.

Coach Samuel Boadu will come under pressure should Hearts of Oak lose again to their city rivals ahead of their CAF Confederation Cup campaign.

Hearts of Oak lost 3-0 to Great Olympics in the last meeting between the two teams at the Accra Sports Stadium.

Eslewhere, Coach David Duncan and his Medeama side will travel to the North to face Real Tamale United at the Aliu Mahama Sports Stadium on matchday two.

The former Black Stars assistant coach got to a flying start with a win in his debut game against Legon Cities at the El-Wak Sports Stadium.

Medeama will be targeting a win in their next game away against a financially troubled RTU side.

Newcomers Nsoatreman will host Bibiani Gold Stars in their first game of the season. Nsoatreman’s opening fixture was postponed due to Asante Kotoko’s engagement in the CAF Champions League against RC Kadiogo.

Coach Mohammed Gargo will kickstart his managerial campaign with the Nsoatreman team this weekend.

Below are week two fixtures at a glance

Hearts of Oak vs Great Olympics