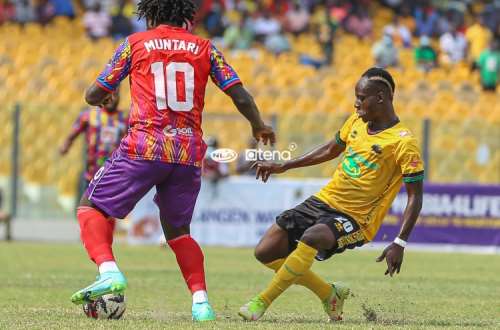 Ghana's two most glamorous clubs, Asante Kotoko and Hearts of Oak will be renewing their rivalry today to see which team earns the bragging rights in the second Super Clash of the 2021/22 Ghana Premier League.

The two clubs will be taking to the field at the Baba Yara Sports Stadium Sunday, April 10 at 3:00 pm as the football world waits for the clash.

The first leg on February 20 ended 0-0 after both teams spurn some good chances however Hearts of Oak beat 2-1 to win the President's Up.

The two teams have set the stage alight for a perfect Super Sunday clash match after recording wins in their last games.

The Porcupines last match in the League was against King Faisal a match they won 0-1 by breaking a previous two-game losing streak against the Insha Allah boys. while the Phobians beat Medeama Cities by the same scoreline at the Accra Sports Stadium.

Kotoko will be aiming to stretch their lead over fierce rivals Hearts of Oak as well as end their winless two games run whereas Samuel Boadu’s will be looking to maintain their unbeaten record against the Porcupine Warriors this season.

The Porcupine Warriors have been dominant this campaign, taking the top spot with 49 points, eight more than second-placed Bechem United.

Hearts of Oak, on the other hand, started slowly but have moved into the top six with a series of positive results over the last few games.