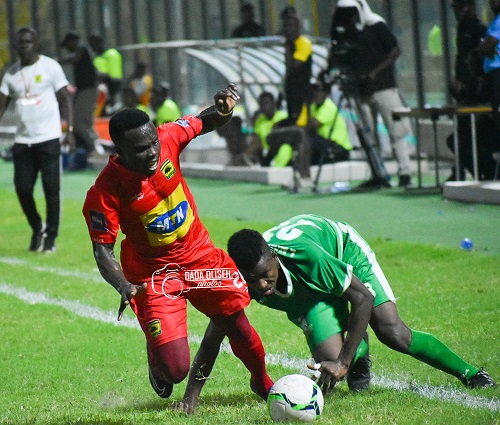 The 2019/20 Ghana Premier League enters match-day 15 this weekend with some exhilarating games to look forward to.

The competition has recorded some amazing results in the season, with the likes of Inter Allies, Elmina Sharks, Medeama SC and Aduana Stars holding their own against giants Asante Kotoko and Hearts of Oak. The midweek games produced some exciting results, where Elmina Sharks held Asante Kotoko to a draw and Hearts of Oak annihilating Great Olympics 4-0 at the Accra Stadium. Aduana Stars won 1-0 against WAFA in an away fixture.

Legon Cities lost 2-0 to Berekum Chelsea in midweek, few days after recording their biggest win in the season, a 4-1 win against WAFA. First-choice goalkeeper Fatau Dauda has missed two games due to injury and his replacement Victor Hornu Komla has settled in very well despite leaking two goals against Berekum Chelsea.

The Royals may have discovered their winning formula but they come up against table-topping Medeama SC. The Tarkwa-based side boast of some talented players in their set up. Goalkeeper Eric Ofori Antwi continues to inspire the team with exemplary leadership.

The return of Eric Kwakwa and Kwasi Donsu has been a boost to Samuel Boaduâ€™s men. One cannot underemphasize the significance of striker Prince Opoku Agyemang, a player with 9 goals in the League. Medeamaâ€™s last visit to the Accra Sports Stadium was a 2-1 win against Inter Allies.

Karela United picked a point on Wednesday against Dreams FC at Dawu, a result that shocked many - but that they were inspired by the indefatigable Emmanuel Keyekeh. He won the man of the match award against Asante Kotoko despite losing 1-0 to the Reds.

The return of Diawusie Taylor and Sadiq Alhassan has brought massive improvement to the side but Karela have won none in three games following a defeat to Kotoko, draws against Dwarfs and Dreams FC. AshantiGold have their fair share of problems, from 6-1 loss to WAFA to a goalless draw against Aduana Stars to a 1-0 loss to Bechem United at home.

This week, the President of the Club, Dr Kwaku Frimpong threatened to resign from the club following a misunderstanding with the supporters of the club. Karela United go into the game as favourites but AshGold could spring a surprise despite their internal wrangling.

Accra Great Olympics suffered a heavy defeat to Hearts of Oak on Wednesday. They were beaten 4-0 in a game that exposed the Dade lads.

They were badly bruised by their arch rivals. Olympics have another regional test against Liberty Professionals on Sunday.Â  The Scientific Soccer lads lost 3-2 to Inter Allies at home.

Starman Elvis Kyei-Baffuor and captain Michael Ampadu showed moments of brilliance on Thursday but two-goal hero George Ansong made the headlines after netting twice in the game. Midfield dynamo Mubarak Alhassan and George Amoako are expected to make life difficult for Olympics.

Abdul Razak Yussif, Eric Osei Bonsu and Emmanuel Clottey missed the absence of the injured Gladson Awako. Olympics have made strides this season but they face a tougher opposition in Liberty Professionals.

Eleven Wonders play Ebusua Dwarfs at Techiman in a match of equals. Wonders lie 11th on the table while Dwarfs sit in 16th place. The game tilts in favour of Wonders following their impressive run of form at the Ohene Ameyaw Park, Techiman.

WAFA were one of the impressive teams on the road in the season until their dreadful loss to Legon Cities last week. Even though Chelsea have lost only one game at home, they are primed for the three points against the Academy Boys.

The impressive display from Stephen Amankona and Zakaria Fuseini, coupled with Richard Kissi Boateng and Jordan Opokuâ€™s experience would be highly beneficial to the Blues.

This game promises to be full of fireworks for many reasons. Itâ€™s a derby and a battle between two of the strong sides in the season. Bechem United remains unbeaten at home.

They inflicted a painful 1-0 defeat on AshGold on Wednesday, a result that could catapult them to greater heights. Yahaya Mohammed scored against WAFA to increase his tally to 11 goals and he will lead the lines against Bechem United on Sunday. On paper, they look very strong.

Aduana Stars have recorded back to back away wins against Dreams FC and WAFA. And that makes the game tricky for Bechem United.

Elmina Sharks have picked four wins from their last six games. Ironically, they met Hearts of Oak and Asante Kotoko in their last six outings and drew with both sides.

At home, they have been resolute coupled with some amazing results on the road - Sharks beat Medeama SC 2-1 at Tarkwa, drew 1-1 with Hearts of Oak and then settled for a 0-0 against Kotoko on Thursday.

King Faisal are yet to win a game after 14 round of games. They are the poorest team in the league. They have picked only 6 points from a possible 42 points.

They play Hearts Oak on Saturday at Techiman. Hearts come into this game fresh from their win against Great Olympics. Benjamin Affutu, Joseph Eso, Michelle Sarpong and Raddy Ovouka were the star players for the Phobians in midweek. Coach Edward Odoomâ€™s men now look fearful and deadly judging from what they showed against Olympics.

They showed hunger, class and desire against their city rivals. King Faisal need to work above themselves to beat the Phobians.

This game pits two high-flying teams against each other. Inter Allies come into the match buoyed by their 3-2 win against Liberty professionals away from home. Victorien Adebayor, their star man scored his 12th goal of the season against Liberty.

Samuel Armah, his strike partner has also been convincing all season. Asante Kotoko have won three of their games in Accra. They drew blank against Elmina Sharks but this game gives them an opportunity to return to winning ways.

Songne Yacouba brought some bite to the game after his introduction on Thursday. He is likely to start against Inter Allies on Monday.