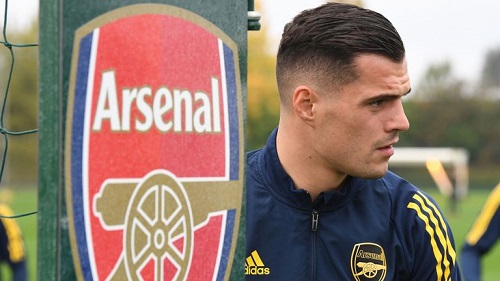 Granit Xhaka has been stripped of the Arsenal captaincy, with Pierre-Emerick Aubameyang taking over the role.

Emery told Xhaka on Tuesday morning he was no longer part of the Gunners' leadership group and said that Xhaka "accepted" the decision.

"I think we need to take time with him, first to protect him and also to be calm and training with us every day. But I was speaking with him this morning and also I decided he's not one of the captains in our group and I decided that and I told him this morning," Emery told Arsenal's website.

The 27-year-old Switzerland international was also left out of Arsenal's squad for their Europa League tie with Vitoria on Wednesday.

Xhaka has not played for the club since he told fans to "f*** off" when he was booed following his substitution against Crystal Palace on October 27th.

He later revealed death threats against his wife and messages wishing his daughter got cancer pushed him to "boiling point" and that is why he lashed out at fans.

"My feeling of not being understood by fans, and repeated abusive comments at matches and in social media over the last weeks and months have hurt me deeply," he wrote in an Instagram post four days after the incident.

"People have said things like 'We will break your legs', 'Kill your wife' and 'Wish that your daughter gets cancer'.

"That has stirred me up and I reached boiling point when I felt the rejection in the stadium on Sunday."

Xhaka's absence against Vitoria means it will be the third successive game the player has missed, following his absence from Arsenal's Carabao Cup fourth-round defeat to Liverpool and their Premier League draw against Wolves.

With Pierre-Emerick Aubameyang not in the 18-man travelling squad for the match in Guimaraes, it is believed Hector Bellerin is likely to take the armband for Wednesday's game.