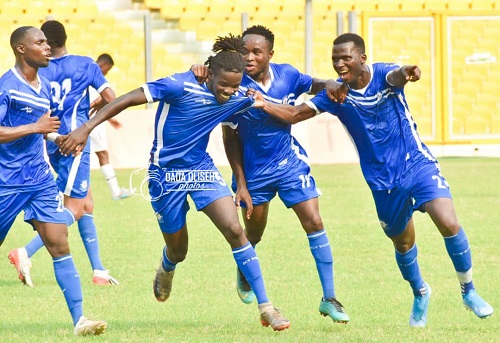 Great Olympics returned to winning ways after their midweek 4-0 loss to Hearts of Oak by beating Liberty Professionals on Sunday.

The Ghana Premier League returnees who were a place above the relegation zone prior to the game needed to make a statement of intent of their survival in the league and they responded to the challenge with a 2-1 win against the Scientific Soccer Lads at the Accra Sports Stadium.

Maxwell Nii Abbey Ouaye scored either side of the half despite Elvis Kyei Baffour's consolation to hand Great Olympics their fifth win of the season that have jumped them to 12th on the log.

The Wonder Club took the lead in the 20th minute courtesy Maxwell Nii Abbey Quaye.Â  The captain on the day stretched to tap home David Amuzu's corner to hand his outfit an early advantage.

They nearly doubled their lead from a corner after goalkeeperÂ Ganiwu Shaibu flapped at a cross but he was saved by Michael Ampadu's goal-line clearance.

Liberty Professionals search for an equaliser before break paid off when they were awarded a penalty on the stroke of halftime after Raymond Grippman obstructed Michael Ampadu.

Elvis Kyei Baffour made no mistake from the resulting kick as he planted home to draw the Scientific Soccer Lads level, becoming his 8th goal in the ongoing season.

In the second 45 minutes of missed chances,Â Maxwell Nii Abbey Quaye scored his brace on the day,Â  6 minutes to time which proved to be the match-winner for the Wonder Club.

They next come up against Asante Kotoko at the Accra Sports Stadium while Liberty Professionals welcome King Faisal to the Carl Reindorf Park in week 16 of the Ghana Premier League.