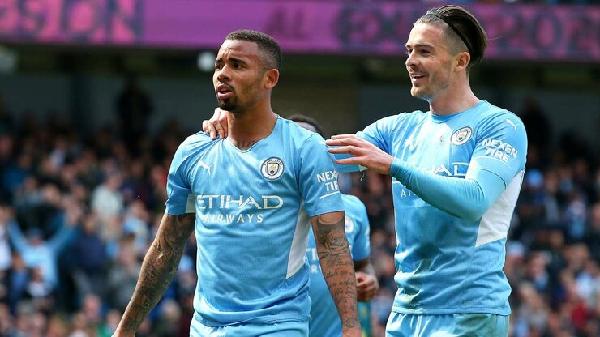 Manchester City wrote themselves into English football folklore by becoming the first team to ever win 15 competitive games in a row against a single opponent as they strengthened their grip on top-spot with a 5-1 demolition of Watford.

Watford’s start couldn’t possibly have been much worse if they had tried. Oleksandr Zinchenko recycled possession inside the penalty area and drilled a ball across the six-yard line which was tapped home with consummate ease by Gabriel Jesus inside three minutes.

City’s opener didn’t particularly serve as a wake-up call to Watford, who conceded their second midway through the first half when Jesus headed home again from Kevin De Bruyne’s mouthwatering cross. If the first goal didn’t spur Watford into life, then the second one certainly did as Hassane Kamara rifled an effort under Ederson to halve the arrears.

Fortunately for City, they restored their two goal cushion before the break with an absolute thunderbolt from Rodri, who volleyed home from 25-yards as City continued in their efforts to boost their goal difference.

Pep Guardiola’s side didn’t have to wait long in the second half before finding their fourth of the afternoon. It took 14 seconds for Ben Foster to foul Jesus in the area, before the Brazilian dusted himself off to fire home from 12-yards and secure his first ever Premier League (PL) hat-trick. City’s football was mesmerising at times and Jesus wasn’t happy with three goals, netting a fourth to cap off a free-flowing City move.

In chasing goals, City almost succumbed to a sucker-punch, but João Pedro headed agonisingly wide from Emmanuel Dennis’ pinpoint delivery - just about summing up Watford’s season and perhaps explains why they find themselves staring down the barrel of relegation.

Try as they might, there were to be no more goals for City, but victory keeps Guardiola’s side perched at the top of the PL table and heaps the pressure back on Liverpool on Sunday afternoon, as all eyes are on Anfield for the Merseyside Derby.