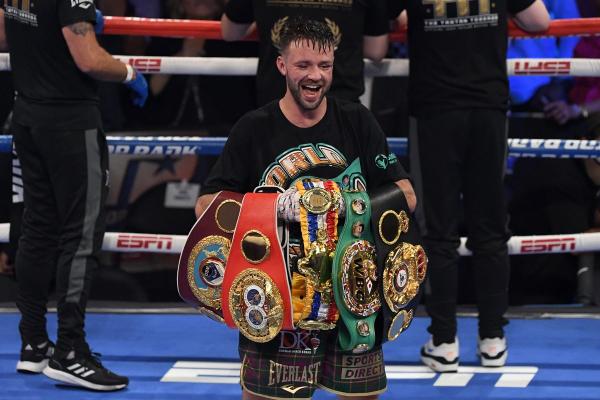 The Scot knocked down the American in Las Vegas with two devastating left hands on his way to recording a 114-112 score on all judges' cards.

Taylor, who is undefeated in 18 bouts after inflicting Ramirez's first loss, is just the fifth man in the sport to hold all four belts in a division.

Victory in the epic contest at the Virgin Hotel in Nevada, fewer than seven years on from winning gold at Glasgow's Commonwealth games as an amateur, means Taylor retains his IBF and WBA titles while adding the WBO and WBC belts to his cabinet.

Question marks were raised about the promotion of the event, billed as bout of the year, with fellow Brit Billy Joe Saunders fighting in front of a record indoor US crowd with Saul 'Canelo' Alvarez a fortnight prior.

But there were no doubts about the quality fight fans were about to witness, with four world title belts on the line and two unbeaten records consisting of 43 contests between two pristine fighters in their prime.

There was everything to lose in Nevada, but glory was also within the grasp of two men at the peak of their powers.

Often fights with so much on the line can take time to heat up, but this one hurled out the blocks as the bell echoed out, both fighters catching each other with body shots early.

Underdog Ramirez started aggressively, catching Taylor with a jab late in the first round and continuing to impress in the second by giving the Scot trouble with a flurry of shots up against the ropes.

The American further pressed Taylor in the third, opening up and lunging forward to land a strong left hand before pressuring the Edinburgh fighter, again on the ropes, and ending the round with a strong uppercut.