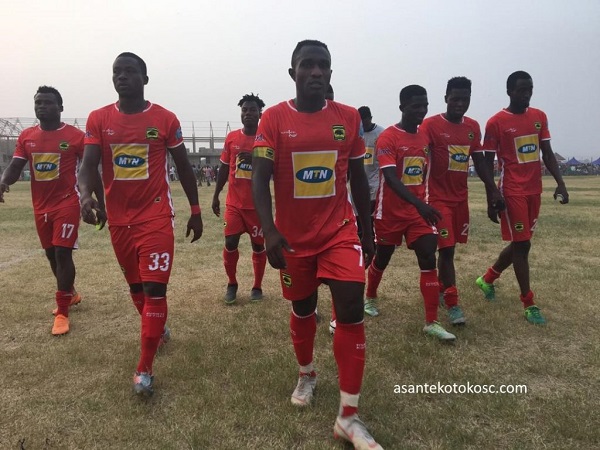 Asante Kotoko thrilled in a 2-0 win over Baffour Soccer Academy as they capitalised on some poor defending to run out comfortable victors at the Baffour Sports Complex on Wednesday.

Kwame Boahene broke the deadlock in the 65th minute after the well composed Baffour Soccer Academy side had impressively kept the Porcupine Warriors at bay in the first half to the delight of their supporters.

The Asante Kotoko midfielder intercepted goalkeeper Clement Bio’s intended pass outside the penalty box and ventured into the deen area to shoot into the middle of the net past the stretching shot-stopper.

Stephen Nyarko replaced Samuel Frimpong on the hour mark, and the midfielder sealed the win for the Porcupine Warriors in the 76th minute when he beat the offside trap unmarked to head home Prince Acquah’s corner kick.

Coach Charles Kwablan Akonnor paraded fringe players for the Boxing Day invitational friendly, organised by the academy’s owner, Ignatius Baffour Awuah, who doubles as the Minister of Labor and Employment and Member of Parliament for Sunyani East Constituency.

The Porcupines Warriors controlled the game from start to finish and could have scored more goals, but for some brilliant saves by Clement Bio.

Obed Owusu’s 21st-minute header was tipped to safety by the young goalkeeper who took turns to deny Kwame Boahene’s close-range header and Naby Keita’s strike towards the bottom corner of the far post.

Substitute, Frederick Boateng’s, fine header to Umar Basiru’s equally fine cross, shortly after the interval, was dealt with by Clement Bio minutes before Anthony Yeboah Jnr connected with an inswinger but hit over the bar with just goalkeeper Muntari Tagoe to beat.