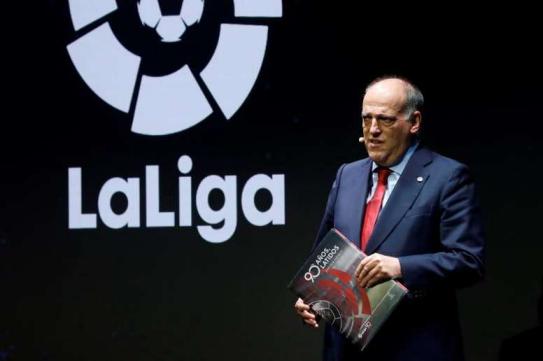 And the often outspoken Tebas claims the Spanish league has improved since Cristiano Ronaldo's departure.

Speculation continues to mount over the Barcelona record goalscorerâ€™s future at Camp Nou amid a number of issues between the Argentine and club chiefs.

Messi's relations with those at the top of the club, including president Josep Maria Bartomeu, have become increasingly tense in the last 12 months.

He then publicly hit out at bosses after technical director Eric Abidal claimed players had been behind Ernesto Valverde's dismissal in January.

Messi again went public last week to take aim at club chiefs over pay cuts in the midst of the coronavirus crisis - after players felt some within the club had attempted to undermine the players as they are reaching a decision.

That is being played out amid a civil war at board level, with Bartomeu seeking to get rid of four members - including two vice-presidents - accusing them of disloyalty.

As such, Messiâ€™s future has been called into question, particularly with the player able to walk away for nothing should he choose to, due to an agreement in his contract.

Inter Milan have been tipped as a potential destination, with noises from Italy claiming chairman Steven Zhang could look to prise Messi to San Siro.

Ex-Inter president Massimo Moratti has claimed that Messi is not â€œan impossible dreamâ€ due to Zhangâ€™s ambition.

But in a sly dig at Messi, Serie A and Ronaldo - who left Real Madrid for Juventus in 2018 - La Liga chief Tebas insists it would "not be a drama" if Messi departed.

"I do not think that the arrival of Messi can solve the problems of Serie A, which are linked to the bad relationship between debts, high and insufficient collections," he said.

â€œSerie A's figures are stressed, and these economic problems certainly are not solved by Leo Messi.

â€œI would like Messi to stay here - but if he leaves it would not be a drama.

'It was said that without Cristiano Ronaldo the league would have lost money.

â€œInstead we would have earned it, even in Portugal. Players help but are not essential to a championship.â€