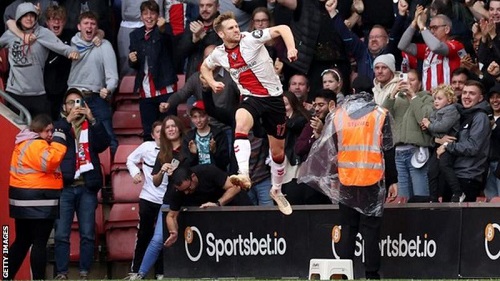 Mikel Arteta described Arsenal's 1-1 draw with Southampton as "a lesson" as the Gunners dropped points for only the second time this season at St Mary's.

Stuart Armstrong finished off a flowing team move to earn Southampton a share of the spoils and stretch Saints' unbeaten league run to three matches.

Granit Xhaka had given the Gunners an early lead with his second goal in as many games, sweeping the ball first time into the roof of the net from Ben White's low delivery.

"It's painful because we wanted to win again," Arteta told BBC Match of the Day afterwards. "Credit to Southampton as well. There are no complaints."

The effervescent Gabriel Martinelli had a shot deflected wide and Gabriel Jesus was denied by Southampton goalkeeper Gavin Bazunu as the visitors threatened to double their advantage before the interval.

Ralph Hasenhuttl's team improved in the second half but needed a superb last-ditch challenge from Elyounoussi to deny Jesus, who had broken clear of the Southampton defence.

Martin Odegaard thought he had put Arsenal back ahead not long after Armstrong's equaliser, but the Norwegian's effort was disallowed after the ball had gone out of play in the build-up.

"We created big chances that we didn't put away," Arteta said. "In the Premier League, when you don't do that when you're on top, you can pay the price.

"We were really good in the first half and totally controlled the game. In the second half we stopped doing the simple things right. We gave ourselves problems with the amount of giveaways, especially in possession.

"We ended the game on top and we tried to go for a second goal, but we didn't find it."

Arsenal fizzle out after bright start

The Gunners suffered a 1-0 defeat at St Mary's last season, but after taking an early lead on the south coast they appeared on course to claim a 10th league victory of the campaign.

Odegaard flashed a shot wide from Xhaka's pass inside 10 minutes, but the Switzerland international made no mistake from White's accurate right-wing cross not long afterwards.

Southampton grew more ambitious as the half wore on but Arsenal, who had won their previous 18 Premier League games after opening the scoring, continued to pose the greater threat in the final third and went close to adding to their lead through Martinelli and Jesus.

Jesus' failure to get his shot off before Elyounoussi's goal-saving challenge proved costly, as Southampton rallied to claim a deserved share of the spoils courtesy of Armstrong's composed finish.

There were few complaints from the visiting players when Odegaard's powerful strike from Kieran Tierney's cut-back was chalked off, with replays clearly showing the ball had gone behind before the Scotland full-back could wrap his foot around it.

The stalemate is Arsenal's first in 28 Premier League matches - since a goalless draw at home to Burnley back in January.