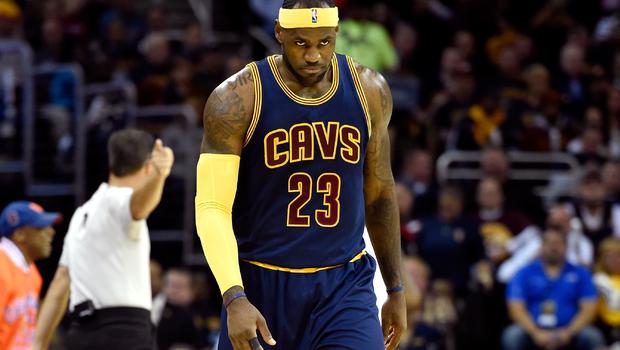 It's been an interesting year for LeBron James. In most seasons, having your team in position to be the number one seed in your conference this late in the year would be cause for celebration and media coverage that resembled kind and loving sex acts. But this isn't most seasons, because the Warriors and the Spurs have somehow evolved to a new level of basketball nirvana. As a result, LeBron and the Cavs have been a constant source of news stories about dysfunction and secret motives and fired coaches.

Recently though, LeBron has decided to fight back. At first he did this with a series of borderline nonsensical tweets that the media went crazy trying to dissect.

Then LeBron unfollowed the Cavs on Twitter. Which was hilarious, but understandable. Who isn't tempted to unfollow their company sometimes? (Not me, bosses. I loveÂ @GQMagazineand would never dream of unfollowing.) And when he was asked about it by reporters, he was not having it.

And then yesterday, after the Cavs beat the Bucks, LeBron was a guest on Richard Jefferson's Snapchat (in a series of snaps that was mostly and hilariously about making fun of how Tristan Thompson steals LeBron's post-game looks), and in the snaps LeBron is heard mocking the media for analyzing his every move. "LeBron you're wearing black is that because you're in a dark place?" and "Why you eating a banana, LeBron? Does that mean you're going to slip on a banana peel out of Cleveland?" It's amazing to watch.

So I think it's fair to say that LeBron has entered the fifth major phase of his career.

Phase 1Â was The Chosen One. LeBron's early years in Cleveland. The boy king. All potential and otherworldly athleticism. Hadn't put it together yet.

Phase 2Â was King James. 2007-2010. LeBron goes to another level, becomes the unquestioned best player in the world. Carries his team far but can't quite win a title.

Phase 3Â was Villain LeBron. Following The Decision, LeBron puts on the black hat (and headband) and leads Miami to two titles and four Finals appearances.

Phase 4Â was Redeemed LeBron. Last season. The feel good story of LeBron's return. All negative attention was on Kevin Love and David Blatt (and at times Kyrie Irving.)

And now we are inÂ Phase 5.Â Hostile LeBron. Hostile LeBron is constantly tweaking the media. He's not letting them in. He's trying to cut them out of the process. That explains his recent musings about possibly getting on Snapchat, and allowing Richard Jefferson to snap this video of him. Also it explains hisÂ UninterruptedÂ program forÂ Bleacher ReportÂ which allows him to address fans directly. It's a fascinating move for King James, but one that I, as a Cavs fan, appreciate. Following a LeBron James team is tough as a fan because the media appetite for new stories is out of control, and as a result you end up with tons of wild speculation. Seeing him try to take some of that power back is pretty great. So welcome Hostile LeBron. We're happy to have you.