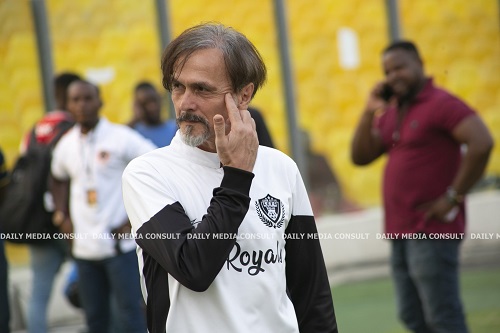 Legon Cities coach Goran Barjaktarevic has called on the Ghana Football Association to improve the standard of football pitches in the country.

The Bosnian-German tactician who was appointed coach of the Royals in 2019 is unhappy with the poor standard of pitches in the country which is hampering the quality of football.

He joins the numerous stakeholders who have lamented about the poor standard of pitches in the country.

The 51-year-old said despite the challenges he faces in the country he has to work his way out to bring the best out of his team.

"I am not here to change the world, but to do the job... that's why I have to adapt myself to these conditions and all that's going on here.

"There are a lot of things about of what you can improve in football in Ghana if your start from infrastructure, pitches, stadiums..."

In the cancelled 2019/20 Ghana Premier League campaign, Club Licensing Board of the GFA approved the football pitches in the country before the league commenced.

The Club Licensing Board came to the conclusions after inspecting the venues proposed by the clubs across the country.

A recent report suggested Goran Barjaktarevic is by far the best-paid manager in the top-flight division. It was reported that he walks away with GH¢30,000 every month.

Reacting to the matter, the Bosnian-German tactician denied he takes home such amount monthly.

"It sounds like you can conclude I came here just because of money, this is what they wrote there but it is definitely not the truth.

"This amount I can get in every fifth Division club in Germany easily, it means I came here because of one project, that is football."