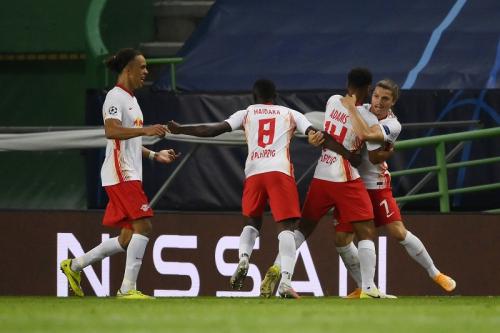 RB Leipzig advanced to the UEFA Champions League semi-finals for the first time with a 2-1 win over Atletico Madrid in the quarter-finals on Thursday evening.

Leipzig, who impressively eliminated last year’s finalists Tottenham Hotspur 4-0 on aggregate in the last round, got off promisingly with Dani Olmo on the charge following the earlier exchanges.

Carrasco easily carved an opening around the area on 13 minutes after getting behind Lukas Klostermann before bringing Peter Gulacsi to a save after trying to pick out the near post.

The Belgian found another look in soon after the half-hour mark following a quiet spell but just like his previous foray, failed to profit with Marcel Halstenberg on high alert at the back.

Leipzig took the lead pretty much against the run of play five minutes after halftime when Olmo sent Marcel Sabitzer’s cross past Jan Oblak and into the far corner.

The move brought the desired fruits after Felix stepped forward to turn home a penalty inside the final 20 minutes after being fouled by Klostermann.

Leipzig regained the lead with two minutes to go after Tyler Adams, who replaced Konrad Laimer, picked out Angelino Tasende’s ball to drill past Oblak with the help of Stefan Savic’s deflection.

Atletico looked to draw level for the second time in the match, but the evening belonged to Leipzig who set up a semi-final date with Paris Saint-Germain.