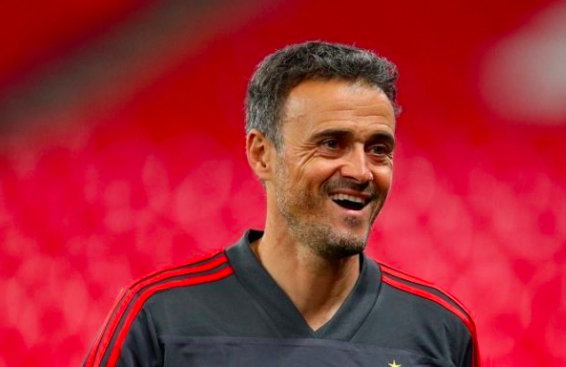 Spain have confirmed their incredible u-turn by re-appointing former Barcelona boss Luis Enrique as their manager.

Enrique has replaced his former No 2 Roberto Moreno, who stepped up after his daughter, nine, died from cancer.

On Tuesday morning former coach, journalist, and Luis Enrique biographer Lluis Lainz told Marca that Enrique had personally requested to Rubiales that Moreno NOT be his No 2.

President of the Spanish Football Federation Luis Rubiales said on Tuesday: 'Luis Enrique can choose his own staff.'

He added: 'The first person who knew that Luis Enrique wanted to return, even before us at the federation, was Robert Moreno.

'We have always acted with respect and transparency. And we have kept our word. The federation has acted coherently with everyone. We are loyal to Luis Enrique and the person who occupied his job.

'Luis Enrique stepped down for the worst possible thing that can happen in a family. He has always been the leader of our project, and has contract until World Cup in Qatar.'

Enrique has been out of work for eight months after taking charge of La Roja for the first time in July last year.

He stepped aside for personal reasons in March before resigning in June to take care of nine-year-old daughter Xanita, who died of bone cancer at the end of August.

Rubiales insisted at the time that 'the doors of the federation and the national team will remain open to him'.

At a press conference today, Rubiales said: 'Today we can confirm that Luis Enrique will return to his position.'

Enrique's assistant, Moreno, took charge in his absence and oversaw Spain's march to the Euro 2020 finals.

While always politely insisting he would stand down should Enrique choose to return, it was reported that Moreno was unhappy at the way his departure has been handled, refusing to speak to the media after the game.

But Rubiales said: 'We have acted sincerely, we have not deceived anyone. Everyone knew that if Luis Enrique wanted to come back he had the doors open.'

Although the Spain players are aware of Enrique's methods from his previous time at the helm, his is now the fifth different managerial spell in the past 17 months.

The 49-year-old, who won eight of 10 matches during his previous tenure, suffering Nations League defeats to England and Croatia, is now tasked with guiding Spain into next summer's European Championship finals and beyond.