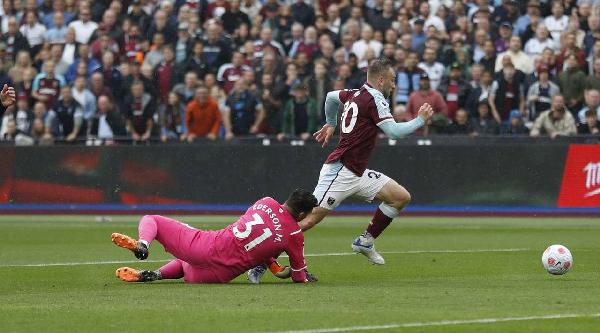 Manchester City came back from two goals down to earn a point at West Ham, but Riyad Mahrez missed a chance to win the game from the penalty spot with five minutes remaining.

Twice Jarrod Bowen was allowed to get behind the Manchester City defence in the first half and finished superbly to give the Hammers a 2-0 lead at the break.

Jack Grealish soon got City back into the game and then a freak own goal from Vladimir Coufal saw the game brought level.

Then, with time running out, Gabriel Jesus was brought down in the box by Craig Dawson and Mahrez shot to Lukaz Fabianski's left but the goalkeeper parried the effort away.

City are now four points clear of Liverpool who have two games behind and are seven goals worse off in terms of goal difference.

Elsewhere, Tottenham Hotspur leapfrogged arch-rivals Arsenal into the top four with a narrow 1-0 victory over a stubborn Burnley side who remain at risk of relegation in the Premier League.

Harry Kane converted from the spot on the stroke of half-time after Ashley Barnes was penalised for handball, a decision which proved decisive as Spurs took one step closer to Champions League football, while Burnley look nervously over their shoulders at the dreaded relegation zone with Leeds and Everton in action later in the day.

Spurs dominated the opening exchanges but were left frustrated by a resilient Burnley defence and inspired Nick Pope in the visiting goal. However, their resistance was broken right on half-time.

VAR and referee Kevin Friend awarded Spurs a penalty with Barnes handling inside the box, putting the ball on a plate for Kane who made no mistake from 12 yards.

Burnley came out fighting in the second half and came within a lick of paint to an equaliser, with Barnes almost making amends with a long-range effort which struck the post.

Spurs came closest to a second when Pope brilliantly denied Son from close-range, but the hosts held their nerve to secure a precious three points in their quest for the Champions League.

Spurs travel to already relegated Norwich City on the final day of the season next Sunday where victory will be the only thing on their minds. As for Burnley, they have a game in hand to play away at Aston Villa on Thursday evening, where they too will be desperate to win and boost their chances of survival.