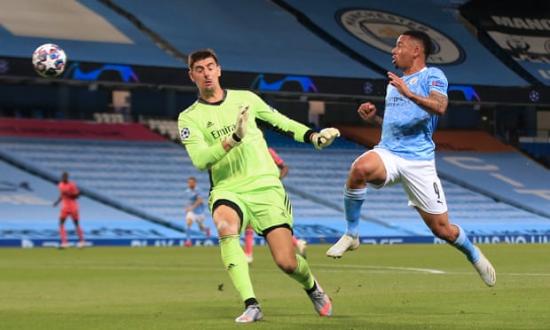 Manchester City were relentless in a dazzling performance of shock-and-awe attacking that pinned back Real Madrid from kick-off to final whistle.

It gave Pep Guardiola’s team – and the club – its finest Champions League result and pits them against Lyon in the quarter-finals.

Zinedine Zidane’s team were just not allowed to breathe, and in Eden Hazard had an A-list act reduced to a bit-part due to City’s dominance. Downing the record 13-times winners in this manner will surely rocket confidence and convince City they can go on and claim the competition for the first time in their history.

For City’s biggest game of the season Phil Foden was retained while Ilkay Gündogan and Fernandinho replaced David Silva and Eric Garcia - the latter perhaps losing a berth for his refusal of a new contract.

Zidane brought in Eder Militão for the suspended Sergio Ramos, Real’s record in Europe without their captain dire: of his six games missed in the past two years five were defeats. The equation for City was simple: keep Real to even a 1-0 defeat and the two away goals scored 163 days ago in Spain would put them through.

On a sultry evening it was noticeable how much louder City’s support was from assembled substitutes and staff, a marker of the high-stakes, and Guardiola will have been pleased at how his team controlled proceedings until half-time.

They were jubilant after nine minutes. Here, Thibaut Courtois passed to Raphaël Varane where the No 5 hardly wanted it: near goal and with Gabriel Jesus all over him. A clumsy touch and the Brazilian had the ball. From here Real were in a nightmare as Jesus found Raheem Sterling who finished for a 31st this season and 100th for the club.

Zidane was dismayed and City were at Real’s throats. Phil Foden, playing as the “No 9”, raced down the right and pulled the trigger. The ball went to Gündogan and his shot was blocked.

There was zero let-up: City were a blue swarm their visitors could not repel. Militão this time was chief dawdler, allowing Sterling to charge him down and he was lucky to win a foul. Now De Bruyne glided into space, threaded possession to Sterling and the No 7 swivelled and unloaded at Courtois, who got nowhere near the ball. He was relieved to see it dip too late.

Sterling and Foden were a double act cutting through Real at will. The latter fed the former and he zig-zagged past two defenders before Casemiro’s lunging tackle saved a second.

Eden Hazard and Karim Benzema, finally, gave City a warning. Concerning here was how the striker made a mug of Aymeric Laporte with a sweet turn on receiving Hazard’s ball. His 20-yard effort was steered behind by Ederson but this was an augury of what was to come.

City were lax as a sluggish João Cancelo was slipped by, Rodrygo crossed, and Benzema headed home. This had Real’s blood up in what was an open, attacking contest summed up by Kyle Walker slaloming to near Real’s area before blasting over.

Tackles flew in, Casemiro mis-controlled, and Cancelo pummelled the ball at Courtois, who was fortunate his parry did not fall to Foden or Sterling.Another howler from Real’s No 1 that gave De Bruyne possession was nearly – again – disastrous: Foden’s lightning swivel-and-shot missed narrowly, as did a De Bruyne corner Courtois beat away from under his bar.

City were in again early in the second half via Cancelo who could find only a pink shirted-opponent.

Then, Sterling forced a point-blank save from Courtois and De Bruyne’s ensuing corner won another which he once more caused the busy keeper to glove out from a direct delivery.

Real were struggling for rhythm. It was all too frantic due to City’s percussive pressing without ball and percussive passing with it. Still, a period passed of Real ascendancy as pink shirts took up occupancy in blue territory.

A quick Foden break, though, and Sterling was in and Courtois had to thwart him.

Despite the 400-contingent inside the stadium the atmosphere was electric. De Bruyne tormented Real with a surge that claimed a corner and it was admirable how positive City continued to be despite being only a conceded goal away from extra time.

Benzema – twice – spurned openings to score this and when Jesus had Courtois palming over on 65 minute the pace remained breathless. City, though, were soon ecstatic: Jesus made it 4-2 on aggregate with a delightful stabbed finish past the stranded Courtois following Varane’s second awful howler – a weak back-pass of a header.