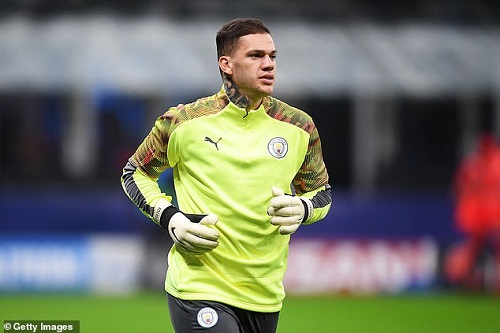 Manchester City have been dealt a huge blow after Pep Guardiola confirmed Ederson is out of Sunday's clash at Liverpool.

Guardiola had feared that his No 1 would not be able to make it after suffering a thigh injury against Atalanta on Wednesday night.

Those concerns were realised after two sets of tests on the muscle problem, with Claudio Bravo now set to deputise in goal.

Bravo was sent off in the Champions League draw in the San Siro, haring from his goal to fell Josip Ilicic – although later insisted that the forward dived.

Guardiola would not put a timescale on Ederson's absence but launched an impassioned defence of Bravo.

'Ederson is not available. We have another top keeper,' the City boss said. 'Bravo can do it too, we won the Carabao Cup thanks to him, he's an exceptional goalkeeper, he played a lot of games for Chile.'

'Why shouldn't I be confident? I would not like to be a player and my manager has doubts about me. I see every day what a good goalkeeper he is.

'The red card is because we lost the ball in a dangerous position. He plays at a top level. He won the Copa America.'

Guardiola maintained that Bravo, who has not started a Premier League game since May 2018, is unfairly criticised.

'Respect the guy. He's an incredible goalkeeper,' Guardiola added. 'The first season he was struggling because the team was not at the top level. It's easy to point towards Claudio.

'Why should I not have confidence? He would not be here if I didn't. All the players are in our squad because we have incredible confidence in them. We have many, many injuries and we need the whole squad.'