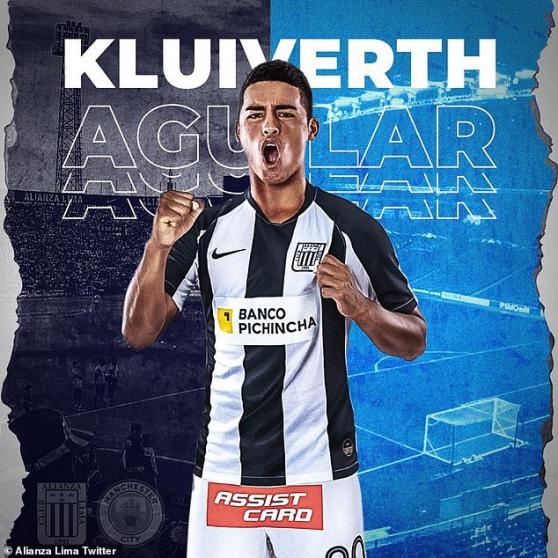 Manchester CityÂ have agreed a deal to sign 16-year-old right-back Kluiverth Aguilar from Alianza Lima, the Peruvian club have announced.Â

Aguilar, who made his professional debut with the club five months ago and is considered to be one of the country's most promising talents, has signed for a deal worth Â£1.5m.Â

However, the teenager will remain at his present club until his 18th birthday on May 5, next year.

The defender made his debut while still at school last November and featured in both legs of their Primera Division final defeat against Deportivo Binacional.Â

So far in his young career he has featured nine times for his club and also featured for Peru's U17 team.Â

He toldÂ Alianza Lima's official website: 'Going to City is something big in my career. I'm happy they have signed me.

'I am glad that the possibility of moving to Europe presented itself to me while I am an Alianza player.'

The club said in their official statement: 'Within its policy of signing players with great projection, Manchester City saw in Kluiverth Aguilar a talent capable of playing at the highest level.Â

'Alianza Lima is proud that a footballer from his team can link his future to that of one of the most prestigious clubs in the world.'Â

Aguilar is not the first player from the club to move across to Europe.

Jefferson Farfan left the club to join for Dutch giants PSV Eindhoven and since then has played for Schalke 04 and Lokomotiv Moscow.

Before that, Claudio Pizarro moved from the club to Werder Bremen back in 1999, before later having spells at Bayern Munich and Chelsea.

The deal for Aguilar is said to include a sell-on clause if he is to be offloaded by Manchester City in the future.Â