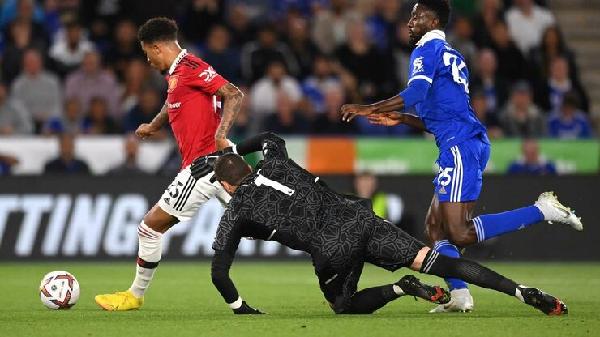 Manchester United sailed to a third consecutive Premier League (PL) victory with a 1-0 win over Leicester City at the King Power Stadium, leaving the hosts rooted to the bottom of the table and winless in their opening five matches.

Leicester City’s King Power Stadium played host to the Premier League’s only action on transfer deadline day and they managed to keep a renewed Red Devils side at bay for much of the opening half, before finally giving in to a superb counterattack.

Jadon Sancho rounded Danny Ward following Marcus Rashford’s accurate through ball, etching the ball comfortably into the back of the net to make it 1-0.

Sitting at the bottom of the league table, the Foxes pushed forward in the hopes of just a second point haul this campaign, but rarely threatened the visitors in the final-third. The home side did respond after falling behind and Harvey Barnes was key to everything going forward but they struggled to create any significant goal scoring chances.

Heading for a third consecutive win, Erik ten Hag went into the break perhaps more satisfied of the two managers.

James Maddison very nearly equalised a few minutes into the second half with a fantastic free-kick into the top right corner but was denied by an outstretched glove of David de Gea, who marvelously thwarted it away to keep his side in the lead.

Casemiro’s introduction on the hour mark prompted a discernible change in the away side’s approach, offering the visitors more defensive rigidity in a bid to maintain a second consecutive clean sheet.

The arrival of Cristiano Ronaldo ten minutes later handed a flurry of chances to United, who previously failed to win 56% of their PL games as away favorites since the start of last season. The Portuguese forward latched onto an accurate  cross with an acrobatic bicycle kick that whiskered inches wide of the right post minutes before FT.

Having ended their hellish seven-game losing run on the road following a 1-0 win against Southampton last matchday, the Red Devils cruised to a second successive away win. It registers three consecutive wins for the first time this calendar year – something the club has managed to do every year since 1987.

Meanwhile, the defeat heaps further pressure on Brendan Rodgers’ status as Leicester City manager as they remain winless this season.