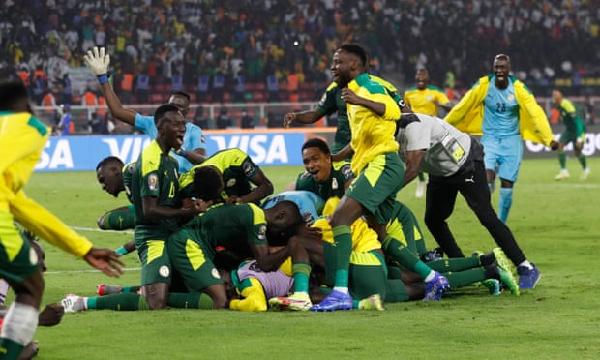 Senegal are going to Qatar 2022 after beating Egypt in another penalty shootout.

Sadio Mane scored the winning spot-kick for Senegal, after Liverpool teammate Mo Salah had sent his penalty over the crossbar.

Egypt have now lost back-to-back shootouts against Senegal, who beat them by the same method in February's Africa Cup of Nations final.

Senegal's appearance at Qatar 2022 will be just their third at a FIFA World Cup.

Egypt went into Tuesday's second leg at the Stade Me Abdoulaye Wade with a 1-0 lead after winning in Cairo four days earlier.

But Egypt endured a nightmare start.

Boulaye Dia put Senegal ahead on the night after just three minutes, before Egypt lost defenders Ramy Rabia and Omar Gaber to injuries inside the first half.

This game had been billed as Salah vs Mane, but neither of Liverpool's attacking superstars were able to stamp their mark on it.

Senegal were by far the better side, registering 25 shots to Egypt's five.

But with the away goals rule in operation in this competition, the hosts knew that one defensive slip could be fatal.

Just as had been the case in February's AFCON final, penalties were needed to separate these two titans of African soccer.

But this time home advantage was at play and multiple Senegal fans gave their side an unfair advantage by aiming lasers into the faces of Egypt's players.

The shootout got off the a shoddy start as the first four spot-kicks all failed to find the net.

Salah had not taken a penalty in the AFCON final as he was Egypt's fifth taker and the shootout was over by the time his turn came around.

This time though he stepped up first, but blazed his shot over the crossbar.

Kalidou Koulibaly, Saliou Ciss and Zizo also failed from the spot, before Ismaila Sarr scored from the shootout's fifth attempt.

Amr El Soleya then converted to get Egypt on the board, but Bamba Dieng kept Senegal's noses in front.

Next Mostafa Mohamed saw his spot-kick saved by Chelsea goalkeeper Edouard Mendy to give Senegal a margin for error.

They did not need it though, as Mane converted Senegal's fifth penalty to wrap up a 3-1 win in the shootout.