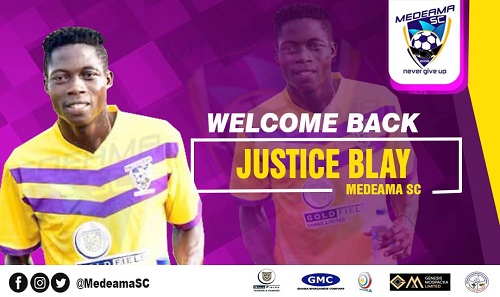 Justice Blay has returned to his parent club, Medeama following the end of his season loan spell with Asante Kotoko.

Blay joined the Porcupines last year on a season-long loan deal from the Tarkwa based club and his performances led to him becoming a fans favourite at the club.

The defensive midfielder emerged as the spearhead of the Porcupines under Maxwell Konadu in the truncated 2019/20 Ghana Premier League campaign.

Blay was keen on staying with Kotoko but, the Kumasi based club failed to finalise negotiations with Medeama SC hence his return.

Medeama today confirm the return of their midfielder, Justice Blay.

And the Blaaaaaaaay returns!@JusticeBlay_ returns to Tarkwa after ending a season long loan at Asante Kotoko.

However, spokesperson for Medeama SC Patrick Akotoko has revealed that his club is ready to negotiate with Asante Kotoko on midfielder Justice Blay.

“We are into football for business reasons but not for charity”. Patrick Akoto concluded by saying they will consider the interest of the player first before a decision will be taken on him.

But, it remains to be seen if the negotiations will happen anytime soon as a 1-year transfer ban has been placed on Asante Kotoko by the life patron of the club Otumfuo Osei Tutu II

Blay scored on his Asante Kotoko debut in the CAF Champions League on August 10, 2019, against Kano Pillars at the Kano Pillars Stadium.

The midfielder helped Asante Kotoko to win 2019 President’s Cup over Hearts of Oak.

His last outing for Asante Kotoko came in the 0-0 draw with Elmina Sharks in March 2020.