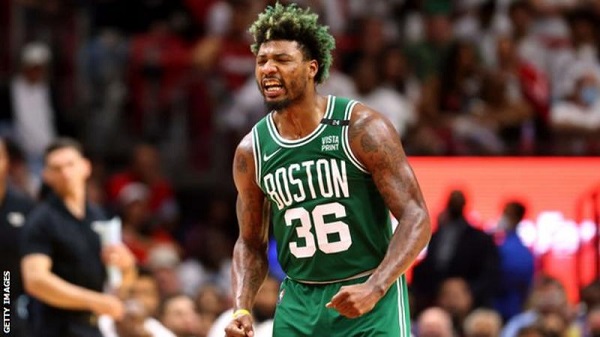 Marcus Smart returned from injury to spur his Boston Celtics side to victory over the Miami Heat, levelling the Eastern Conference finals at 1-1.

A superb all-round effort from Smart saw him contribute 24 points, 12 assists and nine rebounds in the Celtics' 127-102 win in Florida.

Jayson Tatum top-scored for the Celtics with 27 points, while Jimmy Butler led the Heat with 29.

Smart, who sat out game one with a foot injury, said: "I was pumped."

He added: "I felt bad that I couldn't be out there with my team-mates and go to battle with them.

"We're playing against a really good Miami Heat team. I got to get my rest, I got my health back, I got to watch and see some things and come out to execute this game."

Butler had scored 41 points in game one of the series but was hounded by Smart - who scored five three-pointers - on Thursday.

"My assignment was to make everything tough for him," Smart, the NBA's defensive player of the year, said. "We knew he would hit some shots. If he did, he was going to have to work for them."

"We have to realise that. It can't get too much worse. They whipped our tails on our home floor."

Game three of the best-of-seven series is on Saturday (01:30 BST Sunday) in Boston.

In the Western Conference finals, the Golden State Warriors lead the Dallas Mavericks 1-0 and host the second match of the series on Friday (02:00 BST Saturday).