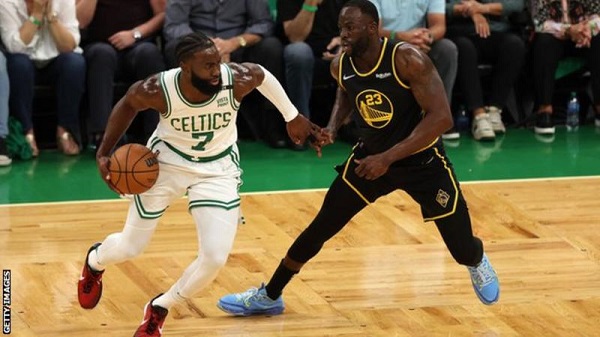 Jaylen Brown scored 17 of his 27 points in the first quarter as his Boston Celtics side beat the Golden State Warriors 116-100 to take the lead in the NBA Finals.

The 17-time NBA champions take a 2-1 lead into game four of the best-of-seven series in Boston on Friday.

"I wanted to impose my will on the game and be aggressive," said Tatum.

"Whether I miss shots or not, I'm going to keep playing. My team-mates believe in me to make the right play to get the best shot. All that matters is that we got the win."

"They punched us in our mouths in game two, and we responded," added Smart.

The Warriors' Stephen Curry scored a game-high 31 points - including six three-pointers - but was replaced in the fourth quarter after appearing to injure his left leg.

Klay Thompson had 25 points and Andrew Wiggins added 18 for the Warriors, who had narrowed their deficit to four points going into the final quarter.

"We weren't going to catch up," Kerr said of Curry's substitution. "We'll know more [on his status] tomorrow."