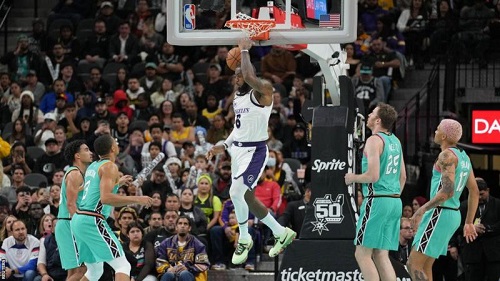 LeBron James helped the Los Angeles Lakers beat the San Antonio Spurs 105-94 on his return from a five-game injury lay-off.

James, sidelined by an adductor strain since 9 November, scored 21 points as the Lakers won their first away game of the season.

"I felt pretty good," said James, who played 33 minutes at the AT&T Center.

"I've been non-stop around the clock [getting treatment] for the last couple of weeks to get back on the floor."

He added: "My rhythm, my timing was a little off on a few of my passes. But I'll be a lot better as the games go on."

"He was moving great," said Lakers coach Darvin Ham. "Obviously there's going to be some rust there, but I thought he looked great."

Anthony Davis scored 25 points for the Lakers as the Spurs suffered a seventh consecutive defeat.

The Boston Celtics beat the Sacramento Kings 122-104, the Golden State Warriors overcame the Utah Jazz 129-118, and the Milwaukee Bucks triumphed 117-102 against the Cleveland Cavaliers.