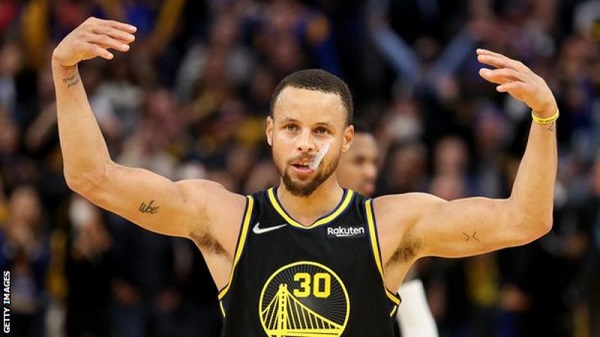 Stephen Curry, a two-time NBA most valuable player, is bidding to win a fourth championship with the Warriors
Shares

NBA superstars Stephen Curry and Giannis Antetokounmpo demonstrated their talents once again by leading their respective teams to series-clinching playoff wins on Wednesday.

Curry scored 30 points in his first start of the play-offs as the Golden State Warriors earned their place in the Western Conference semi-finals.

The Warriors won 102-98 against the Denver Nuggets, securing a 4-1 victory.

The Bucks earned a 116-100 win over the visiting Bulls to reach the Eastern Conference semi-finals, where they will play the Boston Celtics.

Curry, who has been recovering from a foot injury, made five three-pointers, five rebounds and five assists, setting up a Western Conference clash with the Minnesota Timberwolves or the Memphis Grizzlies.

"Some of the threes he made were so incredible, also getting to the rim and making the pocket pass."

Antetokounmpo - a two-time NBA most valuable player - eclipsed the 30-point mark for the third time in the last four games as the Bucks overcame the Bulls.

The victory - which is Milwaukee's first post-season series win over the Bulls since 1985 - sealed a 4-1 win in the best-of-seven series.

"After game two, the team knew what the deal was," Antetokounmpo told ESPN.

"We knew what we had to do, we had to be desperate. We had to go out there and compete at a high level.

"Now we're going to a different series, playing a different team, a very, very good team, and hopefully we can do it again."