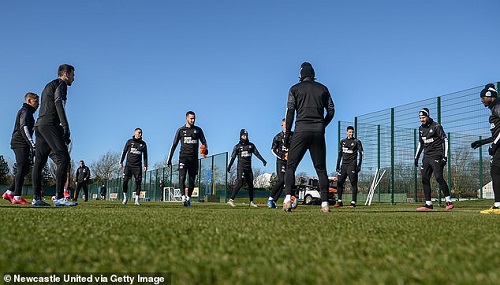 Newcastle have banned their players from shaking hands with each other amid the fear ofÂ coronavirus.

The Magpies have long since had a training-ground tradition whereby players and staff greet one another with a handshake every morning.

But Steve Bruce revealed: â€˜We have a ritual where we shake hands every morning. Weâ€™ve stopped that on the advice of the doctor.

â€˜We have a superb doctor here and heâ€™ll keep us informed. Weâ€™re glued to the TV and let us hope it doesnâ€™t get any worse in this country.â€™

Newcastle have recent experience of trying to contain a virus after an outbreak of a bug over Christmas.

â€˜In confined areas - there was a time over Christmas - when there was a virus knocking around and you have to be careful. Weâ€™re mindful of a bug sweeping through.

â€˜We had it at Christmas where four or five were ill, and you just have to stay at home.â€™

Meanwhile, Bruce is promising a change of system - reverting to four at the back - after two successive defeats and a run of one win in nine matches.

â€˜Very early on in the season, it was evident they were quite comfortable in what they had done before (under Rafa Benitez).

â€˜If changing is a new era, then we will try. We were a threat on the counter attack but that has waned over the past few weeks. So you either have to change system or personnel.â€™Â