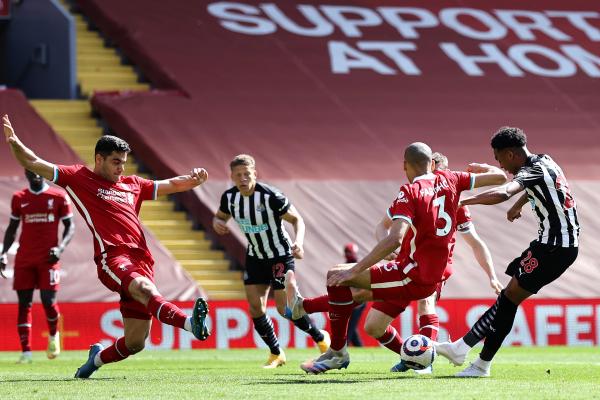 Joe Willock's goal with almost the final touch of the game secured a point for Newcastle at Anfield, as Liverpool were left to rue spurning a number of chances.

Mo Salah's fourth-minute rocket seemed to be enough to give Liverpool the three points and put them back in the top four.

Sadio Mane's cross was headed away from the centre of the goal by Ciaran Clark but Salah brought it down at the back post and then swivelled 270 degrees before slamming the ball into the roof of the net.

Thereafter, in the most open of games, all four Reds forwards were guilty of failing to add to the scoreline when clear opportunities presented themselves.

Newcastle had a goal disallowed for handball from Callum Wilson in stoppage time in what was a wild finish to the match, but Newcastle kept pushing forward and a long ball into the box reached Willock whose effort was deflected off Fabinho, leaving Alisson with no chance.

It was already a season to forget for Liverpool with a meek title defence and trophyless campaign, even before the off-field distraction of this week's aborted interest in the European Super League.

There were muted protests against the club's owners as the team coach arrived at Anfield but the players themselves were loudly cheered and the disruption was nothing like that seen at Arsenal on Friday night.

Salah's superb early goal, spinning to control a clearance and smash in what is - remarkably - Liverpool's first first-half goal at home in 2021, seemed to set them on track for a win that would calm matters on and off the pitch.

Jurgen Klopp lined up Sadio Mane, Roberto Firmino and Diogo Jota alongside Salah in an attacking line-up and they all had chances, with Magpies keeper Martin Dubravka making eight saves in a solid if unspectacular showing.

But as the game wore on Liverpool's intensity and drive faded, an all-too-familiar sight in recent months.

Newcastle's late rally meant two more dropped points for the home side and a disappointing season may yet end without even a Champions League place next term.