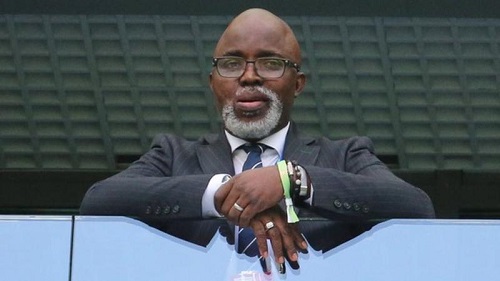 Nigeria Football Federation (NFF) president Amaju Pinnick has blamed investigations by the anti-corruption authorities for the country's recent failures on the international scene.

He added that the NFF was facing a lack of funds as he responded to a call by Nigeria's sports minister Sunday Dare at a meeting on Tuesday for an explanation to 'several failures' from the football administrators.

Nigeria's under-17 and under-20s suffered round of 16 exits at this year's World Cup, the team of locally-based players failed to qualify for the 2020 African Nations Championship (CHAN) as well as suffering an early exit from the regional Wafu Cup tournament.

More recently both the men's and women's teams failed to qualify for the 2020 Tokyo Olympic Games football tournaments.

The NFF boss responded to Dare's comments with a 15-page statement on what problems the body is currently facing.

"Issues of funding (inadequacy and late release of same) and the toxic and disruptive environment in which the NFF has had to operate for the past 18 months (with the Federation's leadership and brand falsely and maliciously dragged from one investigative agency to the other and from one court to the other on same baseless allegations) are the core reasons for the poor outings of the Super Falcons, CHAN Eagles, Golden Eaglets and Olympic Eagles in recent international matches/tournaments," an NFF statement said.

The NFF has been under scrutiny both on and off the pitch in recent months.

The Nigerian government recently dropped its corruption case against five officials of the football authority, including president Pinnick.

But despite this month's development, two other bodies are continuing its investigations into the NFF.

The Economic and Financial Crimes Commission (EFCC) still has two corruption cases against the federation while the Independent Corrupt Practices and Other Related Offences Commission's (ICPC) seized properties in September as part of yet another probe.

The ICPC is yet to bring a formal case against the federation or any of its member but BBC Sport understands that the investigations are looking at allegations of how sponsorship money generated from the second tier of the country's game was spent.

All five top officials have always denied any wrongdoing.

Despite the numerous challenges, the NFF is optimistic about the future and draw some positives from the recent performance of the Super Eagles.

"The best performance indicator for any country in international football is the A team, in this case Super Eagles, which in recent times drew with five -time world champions Brazil and Ukraine in friendlies," says Pinnick.

"And they defeated Benin Republic and Lesotho in 2021 Afcon qualifying matches. These, after finishing third at the first-ever 24-team Afcon in Egypt this year summer."