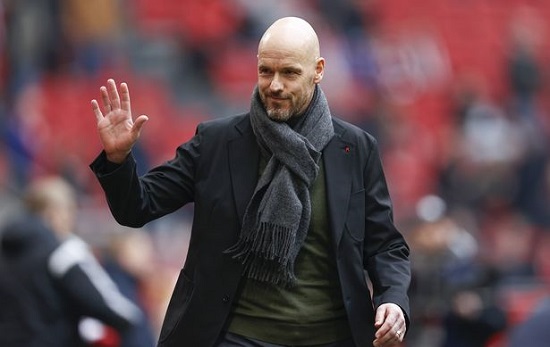 Manchester United have announced the appointment of Erik ten Hag as the club's new manager.

Ten Hag will leave his job at Ajax at the end of the season to become United's fifth permanent manager since Sir Alex Ferguson retired in 2013.

The 52-year-old will be joined at Old Trafford by his No 2 Mitchell van der Gaag.

United confirmed the news in a statement on Thursday morning.

Ten Hag said: 'It is a great honour to be appointed manager of Manchester United and I am hugely excited by the challenge ahead.

'I know the history of this great club and the passion of the fans, and I am absolutely determined to develop a team capable of delivering the success they deserve.

'It will be difficult to leave Ajax after these incredible years, and I can assure our fans of my complete commitment and focus on bringing this season to a successful conclusion before I move to Manchester United.'

Ralf Rangnick has served as interim manager since Ole Gunnar Solskjaer's sacking back in November but United have struggled to make any progress on the pitch.