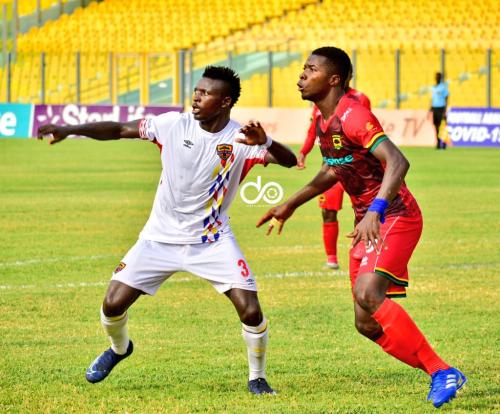 Ghana Premier League matchday 14 outstanding encounter between Asante Kotoko and Hearts of Oak ended in a stalemate.
Despite both sides creating numerous chances they failed to find the back of the net as the game ended 0-0 at the Accra Sports Stadium.

The Porcupines started the game brightly as they had a penalty within a minute of kick off after Kwame Opoku was brought down in box by Nuru Sulley and referee Selorm Yao Bless pointed to the spot.

Minutes later Hearts of Oak had an opportunity to open the scores as Obeng Junior played Patrick Razak through but his effort came off the woodwork.Â

Hearts dominated in the first half but failed to score the opener. In the second half, Kotoko grew in confidence and created some opportunities.

But, Hearts of Oak had a big chance to get the opener when Isaac Mensah was brought down by goalkeeper Razak Abalora in the box. Unfortunately, Mensah saw his spot-kick saved by the goalkeeper.

Kwame Opoku in the dying embers of the game had an opportunity to redeem himself after the first-half penalty miss after ghosting past his marker but his effort came off the post.

The two sides now have 24 points.