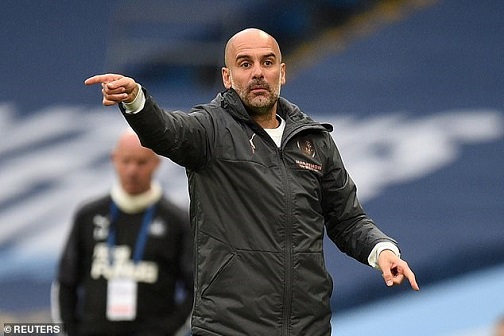 Manchester City manager Pep Guardiola is adamant the club will be participating in the Champions League or Europa League next season despite the prospect of a two-year ban in Europe looming over their head.

City are set to learn their European fate on Monday after appealing to the Court of Arbitration of Sport (CAS).

In February, Guardiola's side were banned from European football for two years by UEFA for breaches of the governing body's Financial Fair Play rules.

They appealed against the punishment - which came with a €30million (£27m) fine - to CAS and a three-day hearing was heard in Switzerland and over video conference in May.

And speaking about their fate on Friday, Guardiola expects the decision to be overturned.

'I'm so confident because I saw the arguments of the club that next season we will be there (in Champions League),' he said ahead of their Premier League match with Brighton on Saturday night.

The result will be significant. Should the ban be upheld, City will have to persuade their star players, in particular 29-year-old Kevin De Bruyne, to remain at the Etihad Stadium despite facing two years without European football. They will also miss out on the vast revenues that the Champions League brings.

Such a verdict would have the knock-on effect that City's place in next season's competition will go to the club which finishes in fifth place in the Premier League.

Should City's appeal be successful, it will be seen as a landmark victory and serious questions of UEFA's FFP system will be asked. A third option that the length of ban is cut is also a possibility.

City were found by UEFA to have committed 'serious breaches' of the rules between 2012 and 2016 following an investigation launched after Portuguese hacker Rui Pinto leaked documents, including internal emails, from the club to German media.

Following the announcement of the ban and fine they immediately announced their intention to appeal, with chief executive Ferran Soriano stating that they had 'irrefutable evidence' to back up their case.