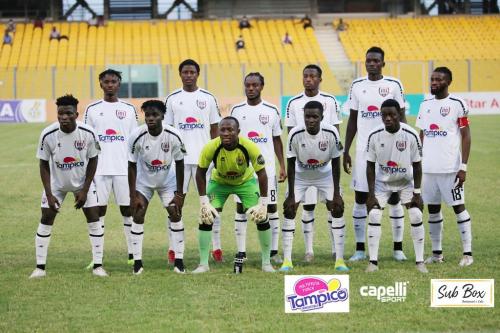 Former champions Ashanti Gold who were battered 5-2 by Legon Cities in Accra on January 22, are returning to the capital yet again, this time the Miners have a date with Inter Allies on match day 17 of the Ghana Premier League on Friday at the Accra Sports Stadium.

The Abokaese lads suffered their worst defeat in the season, throwing away an early advantage to lose 5-2 to the Royals, their first loss in Accra in the ongoing season.

Prior to that defeat, the Miners had drawn with Hearts of Oak (2-2), and beaten Great Olympics (2-1). But their third visit was a nail-biting experience as they shut their eyes in anguish.

AshantiGold have managed only one win in their last eight Premier League matches where they have lost four and drew three in the process.

They have scored six goals and conceded eight in their last three visits to the capital.

The recent slump in form has seen them drop out of the top four to 11thÂ place with 21 points.

On team news, Dacosta Boadu has returned to full fitness. But Appiah Midfielder Appiah McCarthy remains side-lined with an injury.

Inter Allies have brought in former Liberty Professionals and Elmina Sharks coach Felix Aboagye to partner Dani Mujkanovich in their bid for survival as they sit at the root of the table with 11 points from 16 matches.

Allies ended their seven-game winless streak about a fortnight ago when they beat WAFA SC 1-0 in Accra purge them in the fight against relegation and a win against AshantiGold will do them a lot of good.

The side have made some purchase, bringing in, Richard Arthur, Emmanuel Agyemang Badu, Samuel Armah and Abdul Nassiru Hamza. They have also added to the fold Nigerian trio Emmanuel Tochukwu, Kingsley Kuku and Sunday Henry Kalu to augment the squad.

A win against AshantiGold SC will be a feather in their cap amidst the challenges.

AshantiGold have not won a game since the 4-0 win against Aduana Stars on match day 16.