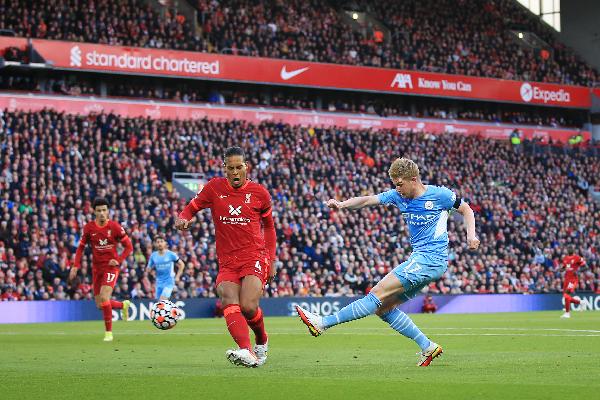 Manchester City and Liverpool meet at Etihad Stadium today, Sunday, April 10 in a huge Premier League encounter that could go a long way to deciding the destination of the title.

Pep Guardiola's leaders start on 73 points - one ahead of the Reds - with just seven games left after this weekend.

While Liverpool arrive in Manchester on the back of a 10-match winning run in the top flight, City - who are going for a fourth title in five seasons - have dropped five points in their past five games since winning 4-0 at Norwich on 12 February.

Victory for the Reds would see them finish a day top of the table for the first time since 1 October.

Of the last eight Premier League meetings between the top two sides to take place within the final 10 games of the season, the team in second has won seven times, including each of the past five in a row.

Liverpool, who have already won the Carabao Cup, can still win a historic quadruple, while City are also chasing success in the Champions League and FA Cup as well as the league.

"There is a lot to go for and for those you need momentum and you need rhythm," said Reds boss Jurgen Klopp.

The Premier League's top two clubs have scored 147 goals between them in the competition this season, with Liverpool scoring 77 of those - seven more than City.

"Maybe in the final third they are more 'wow', more powerful for the quality of the players, but from what I see there are many things where we are close, we work quite similarly," said Guardiola.

Data experts Nielsen Gracenote say victory for City will increase their chance of winning the league to 86%. But an away win will make Liverpool favourites with a 68% chance of finishing first.

City full-back Kyle Walker is back in contention after serving a European suspension in midweek, while Phil Foden - who scored when the sides drew 2-2 at Anfield in October - could return to the starting line-up after coming off the bench to help his side beat Atletico Madrid in the Champions League.

Foden has scored in each of his past three Premier League games against Liverpool, and could become just the second player to score in four straight appearances against the Reds in the competition after Jamie Vardy (five between 2016 and 2017).

Since the start of the 2018-19 season, combining the four campaigns, City and Liverpool are separated by just a single point - the same margin that keeps them apart in the table after 30 games this season.

City lead with 338 points from 144 games, while Liverpool have 337. If the Reds edge ahead in this regard on Sunday, it could be decisive in the title race.

It was a very different picture three months ago.

When Kevin de Bruyne's goal earned City a 1-0 win over Chelsea - then their nearest rivals - on 15 January the title looked done and dusted.

It lifted them 13 points ahead of Chelsea while Liverpool, who had two games in hand, trailed by 14.

At that point, the Reds had failed to win their previous three top-flight matches after drawing at Tottenham, losing at Leicester and drawing against Chelsea.

But since blowing a 2-0 lead at Stamford Bridge, the Reds have clawed their way back into title contention by embarking on a 10-match winning run.

In contrast, City have lost at home to Tottenham and dropped points at Southampton and Crystal Palace.

Speaking about his side's one-time 14-point advantage over the Reds, Guardiola said it was a "fake" lead.

"I'm going to tell you something: 14 points, it was fake. You were wrong. We played two more games [than Liverpool]," added the City boss.

What's at stake?
This eagerly anticipated meeting of the best two teams in England comes at the business end of the season when dreams of winning trophies can be shattered in the space of 90 minutes.

Liverpool are chasing a 'Fab Four' that has never been done before, although Klopp has played down talk of winning the quadruple as "crazy".

They are still going strong in the Champions League as they look to be crowned champions of Europe for a seventh time and will look to seal their place in the semi-finals by finishing off Benfica on Wednesday after establishing a 3-1 first-leg advantage in Portugal last week.

Whatever happens on Sunday, City and Liverpool will also line up against one another at Wembley next Saturday in the FA Cup semi-final.

But Guardiola believes his players may need to win the Champions League to earn the wider recognition he feels they deserve.

They lead Atletico Madrid 1-0 going into their quarter-final second leg in Spain's capital on Wednesday.

"But I agree with people that say, 'You didn't win the Champions League' [because] maybe to have this recognition from everyone in the world outside you do have to conquer Europe."

'Pep is the best coach in the world'

Klopp's record against Guardiola is the best of any of his contemporaries, winning nine and drawing four of their 22 encounters in the Premier League and previously in the Bundesliga with Borussia Dortmund and Bayern Munich respectively.

Even so, Liverpool are winless in four Premier League games against City, while City have lost just one of their past 12 top-flight home matches against the Reds.

Meanwhile, Liverpool have not kept a clean sheet in any of their past 11 Premier League away games against City, since a 0-0 draw in February 2010.

Klopp admits he will not be sad to see the back of Guardiola when he finally retires.

"All I say about City I really mean. Pep is the best coach in the world, no problem with that, but I always wanted to be the coach of the team who can beat the best team in the world.

"Actually I achieved that as well somehow and now we have to make sure Sunday is the day."