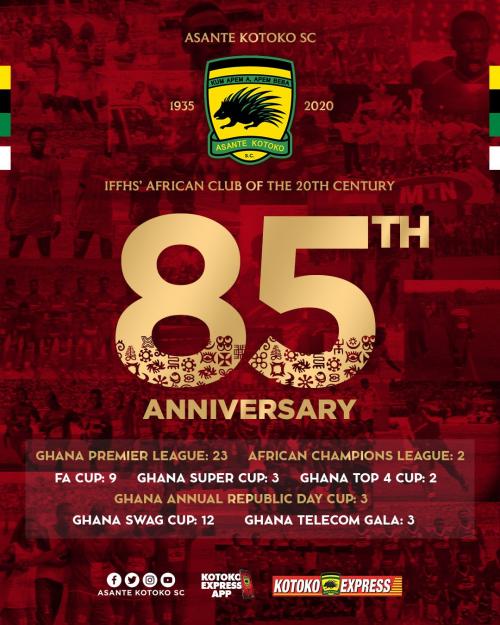 Their home grounds is based at Baba Yara Stadium in Amakom, Kumasi. They compete in the Ghanaian Premier League. They have been champions of the Ghana Premier League a record 23 times, have won the CAF Champions League twice and were adjudged the African club of the century by International Football Federation of History and Statistics. They are also called the Porcupine Warriors.

Today is our day. Our forbears had a vision which is the reason we are able to celebrate the biggest football club on the continent; the legacy and story formed 85yrs ago that continues to grow.🔴🔴#AKSC #StaySafe #AriseLetsBuild #Kotoko@85 pic.twitter.com/O18MhLF8Ku

The foundation of Kumasi Asante Kotoko Sporting Club was laid by 13 young Ashanti men led by a young driver, Mr. Kwasi Kumah, ably supported by L.Y. Asamoah an electrician. Mr. Kwasi Kumah, a native of Nyankyerenease near Kumasi in the Ashanti Region, was a chauffeur to an English man and military officer, a Colonel Ross.

Kwasi Kumah nurtured the idea of forming a football team when he watched an exciting football match. When Colonel Ross returned home for good, Kumah bought a set of jerseys to start his football team. With co-operation from his good friend, L.Y.Asamoah, he formed the Ashanti United Football Club in 1926. Five years later the team was renamed Kumasi Titanics.

The team was really handicapped because most of the players worked in government organizations like the Prisons and Railways and had been transferred from Kumasi. "Kumasi Titanics" did not find enough luck in their new name and in 1934 they adopted a more powerful name, Mighty Atoms. Still the club did not see much progress and in 1935, Mr J.S.K. Frimpong, popularly called Teacher Frimpong, then a teacher of the Kumasi Government School who had all the time shown interest in the club, organized some men from his school and proposed a change of name from "Kumasi Titanics" to Kumasi Asante Kotoko Football Club. Permission had to be obtained from the Asantehene (King of the Kingdom of Ashanti) because the name "Kotoko", meaning "Porcupine" is the official symbol of the Ashanti nation. The Asantehene, Nana Sir Osei Agyeman Prempeh II, became the first life patron of the club.Kumasi Asante Kotoko Football Club was subsequently formally founded in 1935.

Tragedy
The Accra Sport Stadium disaster occurred at the Ohene Djan Stadium, Accra, Ghana on May 9, 2001. Ghana's most successful football teams played that day, the Accra Hearts of Oak (The Phobians) Sporting Club and the Asante Kotoko. Accra had two late goals and a referee would call 2–1 Accra, resulting in disappointed Kotoko fans throwing plastic seats and bottles onto the pitch. The police responded by firing tear gas into the trapped crowd. Panic and a stampede ensued as fans tried to escape. After the hour-long ordeal, it was found that 117 deaths resulted from compressive asphyxia and 10 fans died from trauma.

In January 2020 the team was banned from the Baba Yara stadium temporarily, after violent reactions by their supporters, which led to one of their fans being hit by a rubber bullet that was fired by the police. The fans were seen in various footages, throwing projectiles onto the pitch, because they were displeased with a decision the referee made. This happened in a match that they played against Berekum Chelsea. A GFA ruling, fined the club 20,000 Ghana cedis and the next three games that they would play in the league would be behind closed doors.

Asante Kotoko's emblem features the "Porcupine", displaying an inbuilt arsenal of sharp spikes for use when attacked by an enemy.

Emblem
Asante Kotoko's emblem is symbolizes the national emblem of the Kingdom of Ashanti (Kingdom of Asante) and Ashanti with the colours black, green and yellow enclosing the colours on the national flag and ethnic flag of the Kingdom of Asante and Asante Kotoko's emblem [also represents the national emblem of the Ashanti people and the Ashanti nation (who are more like the Catalan people and Catalonia); the Asante Kotoko emblem features a remarkably threatening looking hedgehog and the motto "Ashanti Twi: Kum apem a, apem beba", which means "If you kill a thousand, a thousand more will come".