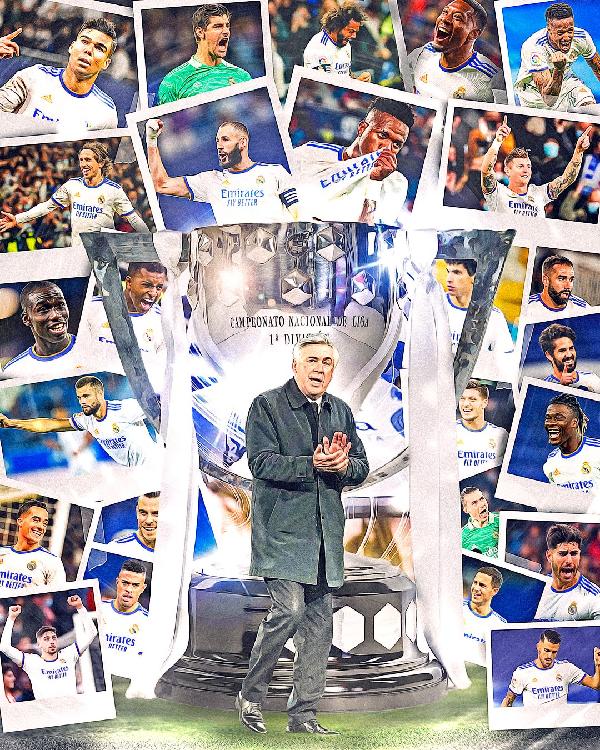 Real Madrid have clinched their 35th La Liga title with four games to spare after beating Espanyol 4-0 at Santiago Bernabeu.

Carlo Ancelotti's side only needed a point against Espanyol to secure the trophy, but ended up taking all three to record their fifth successive victory thanks to a first-half brace from Rodrygo before Marco Asensio and Karim Benzema added gloss.

Madrid have moved 17 points clear of second-placed Sevilla, whose title push effectively ended with a 1-1 draw against Cadiz on Friday, and celebrations are now underway in the Spanish capital.

Madrid's win over Espanyol was their 25th of the 2021-22 campaign, and they have also recorded six draws and three defeats.

The Bernabeu outfit boast the best attacking record in the division with 71 goals and the second-best defensive record behind Sevilla - with only 29 goals conceded to date.

Atletico Madrid finished on 86 points as they won the Liga trophy last season, but their cross-city rivals now only need six points from their remaining four matches to surpass that tally.

Madrid exited the Copa del Rey against the same opponent in the quarter-finals, but could still win a third trophy before the season ends as they remain in the hunt for Champions League glory.

Manchester City are standing in the way of the 13-time winners in the semi-finals, and managed to record a 4-3 win in the first leg of the tie at the Etihad Stadium, but Madrid will still be hopeful of a comeback in the return leg on Wednesday night.