Ronaldinho inspires his team to victory in prison futsal tournament 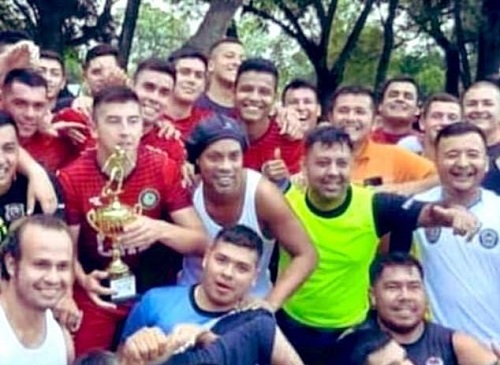 Football legend Ronaldinho remains behind bars in a Paraguay prison, though extraordinary images have surfaced showing he is back to doing what he does best and playing football.

The former Ballon d'Or winner wasÂ reported to be taking part in a five-a-side prison tournament, in order to bring inmates together to compete for a bizarre prize of a 16kg suckling pig.

Pictures appeared of Ronaldinho featuring in the action, wearing a white vest and a pair of floral shorts along with AstroTurf trainers.

Sporting his trademark ponytail, the Brazil icon looked to be straight in among the action as the tournament got underway upon a small concrete pitch.

A later image the showed Ronaldinho surrounded by team-mates, clutching a golden trophy.

The team boasting the former Barcelona and AC Milan superstar won the final matchÂ 11-2, with Ronaldinho scoring five goals and assisting in the remaining six.

The 39-year-old was detained after being arrested for allegedly attempting to enter the South American country of Paraguay with a fake passport alongside his brother.Â

The winning prize of a pig is a far cry from the gong he won in 2002 with his country as Brazil lifted the World Cup for a fifth time. Ronaldinho's lawyer has branded his client 'stupid' over the incident which has landed him in jail.

It has also since emerged that on Friday Ronaldinho was subjected to tests for the coronavirus in the Asuncion prison, as reportÂ Mundo Deportivo.

Adolfo Marin, the legal representative for the former Barcelona star, said that Ronaldinho was unaware that traveling to another country with a false passport was illegal.

'The courts have not taken into account the fact that Ronaldinho didn't know he was committing a crime,' he told Folha de Sao Paulo. 'Because he didn't understand he had been given false documents. He is stupid.'