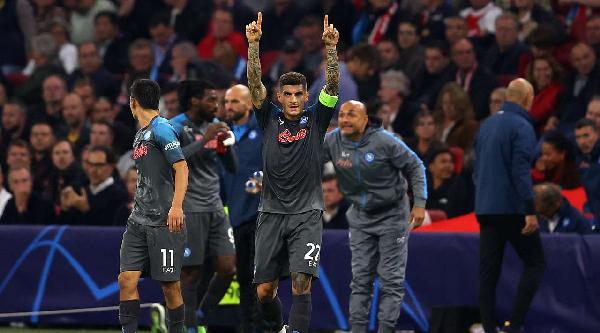 Napoli demolished Ajax 6-1 in Amsterdam as Luciano Spalletti’s side made it three Champions League wins from three.

The first-half was played at an incredible tempo as both side’s tried to implement their attacking style on the game.

Ajax went ahead when Mohammed Kudus scored from close range early on but the Italian side then turned it on scoring three goals before the break.

Giacomo Raspadori headed in the first, Giovanni Di Lorenzo connected with a Khvicha Kvaratskhelia cross after a short corner with a bullet header to put them in front and then Piotr Zielinski finished to make it three.

Straight after half-time Raspadori netted his second of the game when Ajax were robbed of possession when trying to pass out from the back. He then combined with Kvaratskhelia as he calmly finished making it five. Substitute Giovanni Simeone finished late on for number six.

Ajax’s night got even worse when Dusan Tadic was sent off for a second bookable offence.
The result means that, at the halfway stage in the group, Napoli are top with nine points, three ahead of Liverpool - who defeated Rangers 2-0 - while Ajax are third.