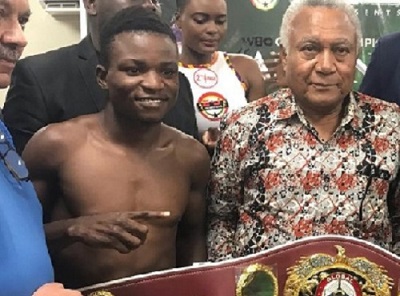 According to the former boxing trainer and manager, despite the solid feat chalked up by Gyatabi, it would be too early to stand toe-to-toe with a titan such as Navarrete.

â€œWasiru is not yet up to Navarreteâ€™s standard and quality. He has some weaknesses and flaws he must carefully cure before fighting Navarrete,â€ he told the Graphic SportsÂ

He urged the diminutive Ghanaian hard puncher to hasten slowly and secure more bouts with acclaimed fighters before setting up a duel with the world champion.

â€œHe shouldnâ€™t rush. He must fight for more titles and those rated above him so that he can get a good rating and acquire the needed experience before coming up against Navarrete,â€ Mr Captan stated.

The veteran boxing administrator who is currently the WBO Africa supervisor advised Wasiruâ€™s trainer Lartekwei Lartey to work on his attack and guard.

â€œWasiru exposes himself to attack when he is about to hit. His right punch is also very predictable and leaves him vulnerable more often, since he does not use his right hand to protect himself when he attacks. His team must work on that,â€ Mr Captan said.

Gyatabi has expressed his readiness for the world championship fight with Navarette (who in 2018 ended Isaac Dogboeâ€™s short reign as a world champion) after ensuring a fourth round stoppage of Beninois John Amuzu to retain his crown at the Bukom Boxing Arena on January 31, 2020.

â€œI think I am ready to challenge Navarette because it is time to end his dominance in the division. This is my time to do it for my country. It has always been my dream to be a world champion and I believe Iâ€™m in good shape to win it by the close of the year,â€ he noted after his feat.

READ ALSO:Â Check out the 10 Black Bombers selected for African qualifier to Tokyo 2020

The legendary boxing capo has, however, cautioned him to exercise restraint and bid his time in order not to suffer the same fate as Patrick Allotey, Richard Harrison Lartey, Habib Ahmed and Rafael Mensah.