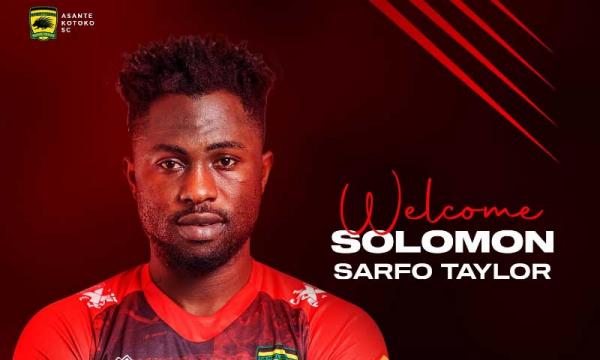 Sarfo Taylor has spoken of his excitement to join the 'dream club' Kumasi Asante Kotoko.

Kotoko made their first signing of the second transfer window with the former Karela United striker on Monday.

The Porcupines announced a deal for Taylor on Monday evening with the striker signing a three-and-half deal.

The 22-year-old joins Johnson Smith’s side on a free transfer having left Danish side Vendsyssel FF and is expected to add more bite to our attack this season and beyond.

Speaking for the first time after completing his move, Taylor said he wants to win laurels with the Porcupines.

“I am very happy to be here. It has been a long dream and I think this is the right time for me to make the move,” he told Kotoko Express after his signing.

“I am joining an amazing group of players and I am confident that I would also contribute my part to take this historic club to places.”

Sarfo Taylor was instrumental for Karela United in the Special Competition in 2019, netting five times in the competition as his partnership with Diawisie Taylor earned them a second-place finish after losing the finals to Asante Kotoko at the Baba Yara Stadium and is expected to be a great addition to Kotoko.

He is expected to join his new teammates in the coming days as they prepare for the commencement of the second round of the Ghana Premier League on April 2.