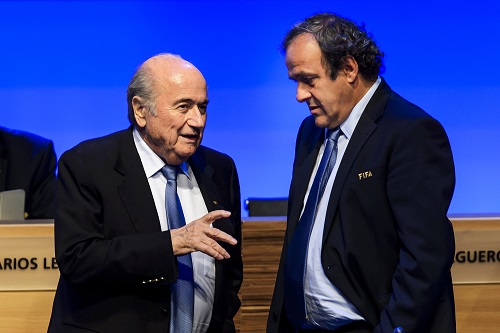 Former FIFA president Sepp Blatter and France footballing legend Michel Platini were both cleared of corruption charges by a Swiss court on Friday.

Blatter, who led FIFA for 17 years, was cleared of fraud by the Federal Criminal Court in the southern city of Bellinzona.

The pair were charged in November following an investigation launched by prosecutors in 2015 into a payment of two million Swiss francs (£1.6m) arranged by Blatter to be paid to Platini by FIFA in February 2011.

The case saw Blatter forced to end his 17-year reign as FIFA president in 2015 and dashed hopes of former France midfielder Platini of succeeding him.  Platini was forced to quit UEFA in 2016.

Speaking outside the Swiss Federal Criminal Court on Friday morning, Blatter said: 'I am not innocent in my life but in this case I am innocent!', and he and Platini have now been acquitted.

Blatter and Platini claim they had a verbal deal in 1998 for the Frenchman to be paid one million Swiss francs (£818,000) to serve as advisor to Blatter, should he be elected as FIFA president.

That defence first failed with judges at the FIFA ethics committee, and later in separate appeals at the Court of Arbitration for Sport.

The FIFA ethics committee investigations  banned them from football for eight years, reduced to six on appeal.

This was just one of 25 investigations by the Swiss Office of the Attorney General (OAG) into corruption in football, with some 12 still pending.

The United States' Federal Bureau of Investigation (FBI) has also investigated corruption in the game.