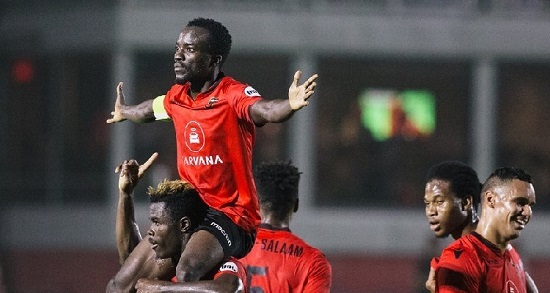 Ghanaian winger Solomon Asante was on target for Phoenix Rising FC as they saw off Real Monarchs in the United Soccer League.

The diminutive winger aided his side to record an all important 4-2 away win over Real Monarchs at the Zions Bank Stadium in their matchday 12 fixture. The win sends them to second on the league log with 20points, trailing New Mexico by 4points who have a game in hand.
Marcelo Silva opened the floodgate for the home side on the 10th minute before Douglas Martinez doubled it on the 25th minute of the game.
Two quick goals from Adam Jahn and Jon Bakero on the 32nd and 35th minute ended the first half in a 2-2 stalemate.
Forward Junior Flemmings added the third for Phoenix before Asante put the game beyond reach in the 81st minute. He scored a stunner from a distance.
The goal takes his tally to 5 with 5 assists in 10 appearances in the 2019 season.
READ ALSO: