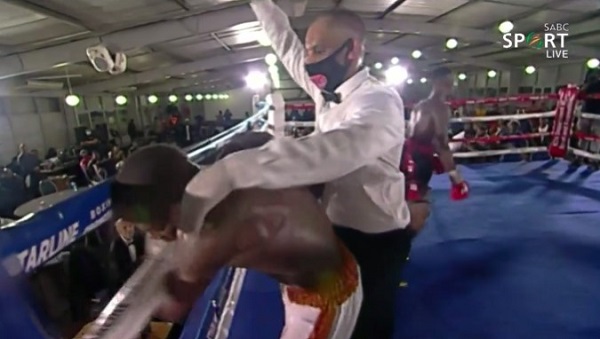 South African boxer Simiso Buthelezi, who had been placed into an induced coma in Durban on Sunday after shadow boxing in the ring, died on Tuesday night, according to Boxing South Africa.

The lightweight boxer had been contesting for the WBF All Africa lightweight title when he became disoriented in the ring, and was rushed to hospital. He was placed into a coma at 11pm on Sunday.

BSA released a statement on Wednesday: "It is with great sadness for Boxing South Africa and the Buthelezi family to announce the passing away of Mr Simiso Buthelezi, who passed away last night on 7 June in hospital in Durban.

"Towards the end of his bout, Mr Buthelezi collapsed and was taken to hospital and it was discovered that he suffered a brain injury which resulted in internal bleeding. At the hospital, Mr Buthelezi was given the best care possible but he succumbed to the injury."

It is unclear how he suffered the injury as he had taken no heavy blows to the head during the fight, and his trainer told media that Buthelezi had been in perfect health before the bout.

Trainer Bheki Mngomezulu said on Monday, per News24: "There wasn't anything untoward in the fight and in training. He was leading the fight on points before the unfortunate incident occurred.

"I really can't explain what happened, to be honest. It was bewildering, but in his training and in the build-up to the fight, there was nothing untoward with regards to his condition. He was in good nick before the fight."

BSA added that they would be launching an independent medical review of the incident, which caught the attention of the world's boxing media due to the bewildering nature of his symptoms in the ring.

Buthelezi was in the final minute of a 10-round bout against Siphesihle Mntungwa when he went on the attack, and his opponent stumbled backwards between the ropes.

Buthelezi, untouched for most of the bout, then turned his back on Mntungwa and began to shadow box towards the corner of the ring, at which point referee Elroy Marshall quickly called the fight off and called for the medics.

Ring announcer Sipho Mashego told ESPN that Buthelezi had been in full control of the fight, and that the arena was 'dumbfounded' by Buthelezi's sudden change in demeanour: "Simiso was dictating terms, he was actually controlling the fight from round one. He didn't take any punishment from his opponent.

"But this was the last round, with 14 seconds to go, and his opponent fell out of the ring. [Buthelezi] then started swinging wildly, and no-one understood what was going on. It was bizarre."

Buthelezi, who had recently graduated university with a degree in botany and zoology, was 24.