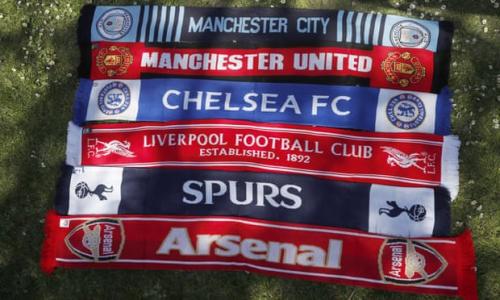 Uefaâ€™s president, Aleksander Ceferin, has insisted that players who join the new European Super League will be banned from World Cups and European Championships if the breakaway materialises.

Ceferin admitted it was unlikely a ban would come into effect in time for Euro 2020, which starts in June, but left no one in any doubt at his anger at the Super League, which he called a â€œdisgraceful and self-serving proposal from clubs motivated by greedâ€.

â€œThe players who will play in teams that might play in the closed league will be banned from playing in the World Cup and Euros, so they will not be able to represent their national teams at any matches,â€ he said. â€œThese cynical plans are completely against what football should be. This idea is a spit in the face of all football lovers and society as well. Iâ€™m not going to call them the Dirty Dozen, but â€¦â€

Ceferin also suggested it was not impossible that domestic leagues could kick out teams that have broken away. â€œThis is the decision of domestic leagues but we are in contact with them and Iâ€™m sure they will do the same sanctions, as we will do within the law of course,â€ he said.

Earlier Uefa confirmed it would plough on with a revamped 36-club Champions League from 2024 whether or not the European Super League is established. However Ceferin admitted he was blindsided by the announcement on Sunday.

â€œIâ€™ve seen many things in my life, I was a criminal lawyer for 24 years, so Iâ€™ve seen different people, but Iâ€™ve never ever seen people like that,â€ he said. â€œIf I start with Ed Woodward,â€ he added of Manchester Unitedâ€™s executive vice-chairman. â€œI didnâ€™t have much contact with him but he called me last Thursday in the evening, saying that heâ€™s very satisfied with the reforms, that he fully supports the reforms, and that the only thing he would like to speak about is financial fair play. And obviously he already signed something else.â€

Ceferin was even blunter when talking about the Juventus chairman, Andrea Agnelli. â€œHeâ€™s probably the biggest disappointment of all,â€ he said. â€œI donâ€™t want to be too personal. But the fact is Iâ€™ve never seen a person lie so many times, so persistently. That he did was unbelievable. I spoke with him on Saturday afternoon. He says: â€˜These are only rumours. Donâ€™t worry, nothing is going on.â€™ And then he said: â€˜Iâ€™ll call you in one hour.â€™ And he turned off the phone. Next day, we get the announcement. Iâ€™ve seen many things in my life but not a situation like that. Obviously, greediness is so strong that all the human values evaporate.â€

Earlier Ceferin was asked whether it is right for a player who might have signed with a club years ago to be banned from his national team if that club joins the breakaway. â€œYeah, itâ€™s an interesting question, and I think that this is one of the legal questions,â€ he said.

Ceferin ended his punchy press conference with a final retort to the clubs that have decided to leave. â€œHow can you see all your fans protesting and you donâ€™t care?â€ he said. â€œYou are full of money anyway, but you want more and more and more. Iâ€™ve had enough that football clubs are assets â€“ they are part of our history.â€