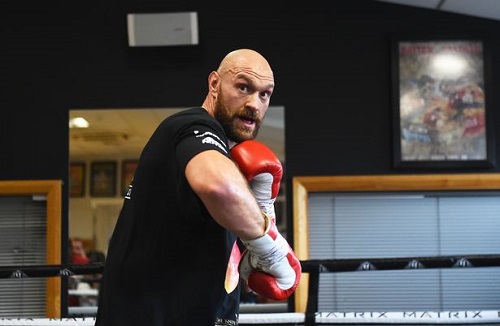 Tyson Fury and his cousin Hughie could be slapped with eight-year bans after UK Anti-Doping launched a second investigation into the heavyweights' failed drugs tests.

The Furys tested positive for the banned steroid nandrolone in 2015 but claimed it was due to them eating uncastrated wild boar.

After a lengthy investigation which cost Â£600,000 and almost bankrupted the organisation, UKAD handed the cousins backdated two-year bans.

That left Tyson free to return to the ring in 2018 and last month he defeatedÂ Deontay WilderÂ to become heavyweight world champion for a second time.

But a report in the Mail On Sunday claims a farmer was convinced to lie during the investigation and claim he sold wild boar to the Furys.

UKAD have since confirmed they will investigate and if the Furys are found guilty of tampering with the initial investigation it could mean an eight-year ban for a second offence.

Lancashire-based farmer Martin Carefoot alleges he was offered Â£25,000 by a friend of the cousins to lie but was never paid.

"I just went along with it, and they always dangled this carrot that I was going to get paid," he told the Mail on Sunday.

"When things got quite serious, they offered me a sum of money before it went to court in London, and a sum of money after. I went along with them because, I suppose, in my own way I was just helping them out."

Neither Fury has commented on the allegations but Tyson's promoter Frank Warren - who did not represent the world champion in 2015 - has rubbished the claims.

"The farmer making these outrageous allegations sent me a letter last October, full of errors and basically telling me he had committed perjury by signing statements under oath and lying," he said.

"When I called him, he asked for money. I told him to clear off and get in contact with Ukad. He chose not to speak to Ukad but instead speak to a newspaper.

"How anybody can take this man seriously is beyond belief. Tyson has never met this man in his life. What a load of rubbish. We'll leave this with Ukad to look into and don't expect it to go any further.

"It looks like while the football season has been paused, there's nothing to write about and silly season has instead commenced."